An ancient crozier that would have been carried by a bishop back in the 9th century caused something of a stir in the Shankill on Tuesday. (Check out our photo gallery below).

The historic artefact – or the parts that survived centuries underground – were brought to St Matthew’s Parish Church from Dublin by staff from the National Museum of Ireland to go on display for one day only.

The crozier was discovered in the grounds of Shankill Graveyard adjacent to St Matthew’s 300 years ago and is kept in the National Museum of Ireland in Dublin.

Its trip north was part of a project organised by St Matthew’s, Queen’s University, Belfast,  and the Greater Shankill Partnership to mark the 150th anniversary of St Matthew’s Church. In order to celebrate and showcase the evolving social history linked to the church and the community, Queen’s is facilitating an exhibition of photos, artefacts and displays.

As part of that exhibition, the Bishop of Connor, the Rt Rev George Davison, loaned four croziers to St Matthew’s to be exhibited alongside the 9th century crozier.

At the exhibition launch on March 8, pupils from three local primary schools, Glenwood, Black Mountain and Forthriver, attended for a tour of all the historic artefacts, including old photos and press reports of events in the area’s past, and were given a talk on the ancient crozier by Bernard Gilhooly from National Museums of Ireland, and on the Connor croziers – the oldest dating back to 1975 – by Jacqueline Weir from St Matthew’s. 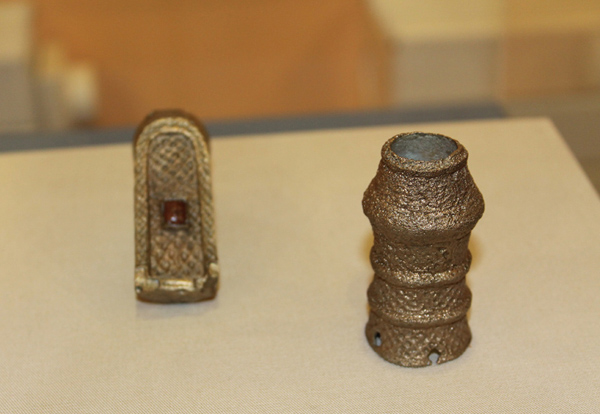 The remaining parts of the historic crozier found 300 years ago in Shankill Graveyard.

Guests heard how the exhibition had come about from the rector, the Rev Tracey McRoberts. “We thought it was a lovely idea but never thought it would see the light of day,” she said, thanking all those organisations and individuals who had helped along the way.

Dr Jackie Redpath MBE, Chief Executive of the Greater Shankill Partnership, described this as a very special day. “I am delighted with what is on display. The Shankill has lots of jewels not always recognised. This church is one of them, the Shankill Graveyard is another,” he said.

He said the partnership between the different organisations involved in the project had been fantastic, and paid tribute to Queen’s University staff Sam Guthrie and Prof Olwen Purdue, and to the National Museum of Ireland.

Prof Nola Hewitt-Dundas, Pro-Vice-Chancellor at Queen’s, said the university was a little older than St Matthew’s, ‘but not much.’ She said it was a privilege for Queen’s to work in partnership with the different groups in the Shankill, and commented on how engaged the schoolchildren had been with the exhibition.

“Queen’s is committed to working in partnership for societal change. The project at St Matthew’s is a perfect example of bringing the best of our talent and expertise to work in partnership with the community to deliver genuine and meaningful local benefit,” she said.

Speaking in advance of the exhibition launch, Prof Purdue, Professor of Social History at Queen’s, said: “This church, and the parish it serves, has an important history, dating back to pre-Christian times and closely connected to the wider history and growth of Belfast.

“The people of these streets have experienced wars and rebellions, industrialisation, urban change and conflict; they have also experienced work, play, loss, childhood, old age.

“This exciting collaboration between academics, public history students and local communities seeks to capture and tell the stories of these streets and the people who lived in them to explore the rich and diverse social history of this neighbourhood and community and develop new resources for learning and engaging with local history.”

The exhibition will be open again on Saturday March 12 from 2.30pm-5.30pm when Queen’s researchers will be in St Matthew’s for a ‘History Harvest.’ Anyone with stories, photos or objects from the church or local area is invited to bring them along so that they can be recorded.