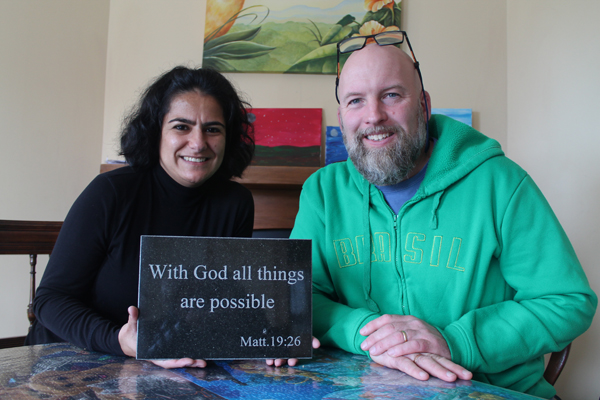 Silvana and Sam Shaw back at their home outside Lisburn. The granite plaque was a gift from their Ukrainian friend Vera. Granite is widely mined in Ukraine.

Two Lisburn Cathedral parishioners have recently returned from Poland having been prompted to travel to Eastern Europe in order to help those fleeing the war in Ukraine – and those choosing to stay behind.

Confronted with scenes familiar to many of us after the Russian invasion, Sam and Silvana Shaw left their young children in the care of friends to go to the aid of those in need – Sam driving essential supplies to the Ukrainian border, and Silvana flying to Poland to assist a charity supporting those fleeing the devastation.

For Sam, a puppeteer with ‘God’s Handiwork Puppets,’ this mission was inspired by a country he has grown to love and a people he felt compelled to help.

“The people who trained me in puppet ministry asked me to go to Ukraine to support local Baptists in their children’s work,” he explained. “I first went out in 2004, and for several years I was in Ukraine for two or three weeks at a time, running programmes in churches, schools, villages and orphanages.

“My last trip was in 2007 when I travelled through Crimea where this war started. They knew Russia was coming back and they weren’t scared of them. Further west, they were more afraid.”

Sam Shaw’s journey to and from the Ukrainian border.

When the invasion of Crimea happened in 2014, Sam was in contact with his Ukrainian friend Tim, who ministers in a rural Baptist church, and his wife Vera. Following the Russian invasion last month, Sam again made contact with his friends. At the same time, Brazilian-born Silvana was responding to a tug at her own heart.

She had contacted a Brazilian friend now living near the German border in Poland. “She had set up a voluntary group working to find safe routes out of Ukraine for families who needed help,” Silvana said. “I felt I should thank her for what she was doing, and it was in my head and my heart to go and do something. My friend said, ‘just come!’” Silvana flew to Berlin on March 7 and travelled by train to her friend’s house in Zgorzelec.

She was unsure what she could do to help.

“When I arrived, my friend said my just being there was such a relief and joy, she was amazed how God could bring someone from the UK to help.”

Silvana’s friend’s charity initially helped Brazilian nationals living in Ukraine to leave, but is now working with all refugees who are fleeing the war. Volunteers drive the seven hours to the Ukrainian border to collect refugees. Back in Zgorzelec, they identify safe routes to get people out of the country.

“One day there were no refugees at the border because there had been a lot of bombing in Kyiv and people were afraid to leave their shelters in the city,” Silvana said.

“Another day, a girl in Kyiv was in touch wanting to leave, but there was no train. Volunteers had to analyse where might be safe for the girl to go, and she was picked up in Kyiv and driven over the border. Christians who have chosen to stay in Ukraine are helping others – we got a What’s App message from a 90-year-old woman in a wheelchair. We could not ask her to get on a train, and so we are sending in food for this lady.” 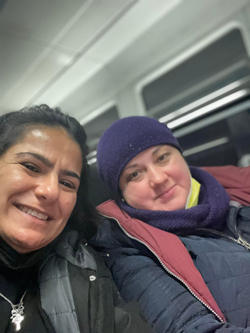 Silvana with a Ukrainian lady she met on a train in Poland. The woman and her seven-year-old daughter had left family behind and were making their way to France.

As she returned to Berlin by train, Silvana met a lady travelling with her seven-year-old daughter, her sister who had a baby, and a teenager. They had left Ukraine and were hoping to reach France where they had friends.

“It really touched me,” said Silvana. “I gave her some Euros, and she started crying because she was so grateful. Her son and daughter didn’t want to come, and had stayed in Ukraine. She showed me their photos. She left behind her mother and father as well. We did not speak the same language, but we communicated through her photos. She showed me one of a swimming pool and gestured to show it had now been blown up.”

Sam had planned to stay at home with the couple’s children while Silvana was in Poland, but that changed when Vera was in touch from Ukraine asking if he could bring certain items through Europe. Vera had already fled her city home due to bombing – by a miracle her apartment had escaped unscathed while all those around her had shattered windows – and was now staying in the countryside at her husband’s church.

She sent a list of items required by the Local Citizen’s Defence as the men prepared to fight – tourniquets, bandages, medicines, thermal underwear and high vis jackets, sleeping bags, tools for repairing roofs and windows on bombed buildings, ladders, older style mobile phones that would hold a charge for longer, a stove for cooking and heating, large thermos flasks, and a diesel generator.

Sam shared the list with a small number of churches, including Lisburn Cathedral, and planned to leave for Ukraine on March 10.

Silvana was not due home until a couple of days later, but their prayers were answered when friends offered to look after their children. Sam and his friend Mick got a van and trailer ready to go. “People from church came to help pack and roughly catalogue everything,” Sam said. “Sourcing a large diesel generator in Northern Ireland was hard, but we found one in Dublin and a neighbour drove down to pick it up. 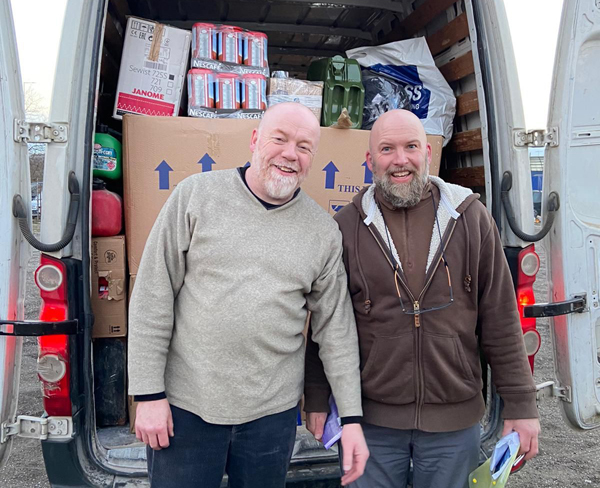 Sam (right) and his friend Mick with the van packed full of supplies for Ukraine.

Sam and Mick left Lisburn on March 10 and drove to Poland via Wales, England, the Netherlands and Germany, with two ferry crossings en route. They arrived at the Ukrainian border on the night of March 13, planning to cross to meet their friends the following morning.

“It was midnight, but well lit. There were lots of armed police and aid organisations with food stalls, but not a lot of activity at the time,” Sam said.

Plans had to change when Vera was in touch to say the goods needed to be transferred that night. And as Sam did not have the necessary registration for his trailer, he was not allowed to drive over the border into Ukraine.

Instead, Vera crossed to meet Sam and Mick. She had been accompanied on the seven-hour drive from her church by two male friends, but as men between 18 and 60 are not permitted to leave Ukraine, Vera had to cross the border alone.

In a carpark nearby, Sam, Mick and Vera transferred everything into her van, finishing at 5am. They said their goodbyes and Vera headed back into Ukraine.

“We closed the doors and drove west until we were too tired to keep going,” Sam said.

“What was beautiful was the number of convoys of vans heading to Ukraine with aid, including four fire engines from Denmark. Just ordinary people doing their bit.” 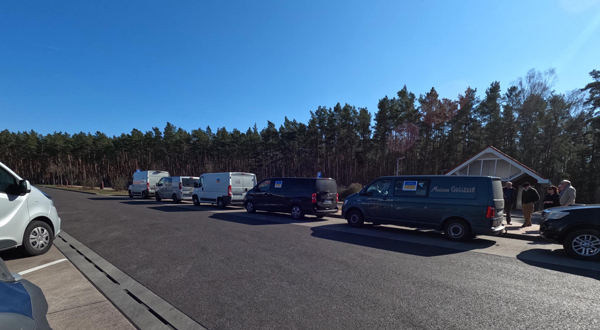 One of many aid convoys Sam saw making their way to the Polish Ukrainian border.

After ‘a mad dash’ through Holland and an unexpected need to do a Covid-19 test before boarding the ferry, Sam and Mick made it home on March 15. The good news had come through that, after 14 checkpoints, Vera had got all supplies from Northern Ireland to the safety of her husband’s church. 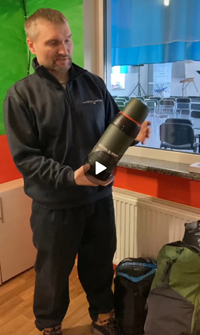 A deacon in the church in Ukraine which received the goods from Northern Ireland expresses his thanks in a video.

In a video message, a local church deacon expresses his gratitude.

“Dear Irish brothers and sisters,” he says, “we are so glad that you help us in so difficult a time for our country. Thank you very much. You have a love for people who you do not know.”

Sam thanked all who had responded to his appeal. “We would never have thought it was possible to gather up what we did and get it out there in the space of a week,” he said. He added that if their Ukrainian friends ask for help again, both he and Silvana will be ready to go back.