A warm welcome for asylum seekers in Kilroot 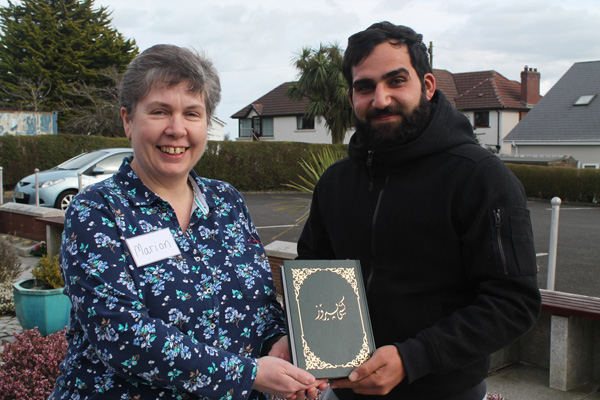 Volunteer Marion Magill sourced a Bible written in Kurdish as a gift for one of the asylum seekers who does not speak English, and presented it to him when the group visited St Colman’s on March 16.

Every Wednesday afternoon, the parish hall at St Colman’s Church in Kilroot, Carrickfergus, welcomes a group of refugees and asylum seekers who are currently housed in a local hotel.

There is space inside and outside the hall for the visitors to relax, chat freely with each other and with volunteers from St Colman’s and All Nations Ministries, enjoy refreshments, and take part in board games or play basketball or football and sometimes table tennis. [Photo Gallery below].

Recently, the women and children living in the local hotel were moved to Belfast and rather than let friendships fade, St Colman’s Parish has been bussing these families back to Kilroot on special days so they too can enjoy some space away from the confines of their hotel.

Wednesday March 16 was such an occasion, when a local business provided pots of Irish stew as the refugees and asylum seekers joined with volunteers to celebrate St Patrick’s Day.

We paid a visit to St Colman’s on March 16 to hear about the impact of this project on those who have had to flee their homelands and to learn more about the initiative from the rector, the Rev Nigel Kirkpatrick, and parishioners who give up their time each Wednesday.

Every refugee has a story to tell and some were willing to talk in halting English about the lives they have left behind. In our photo gallery you will see a man speaking to his daughter via What’s App. He is Masoud Ali, a 45-year-old father who fled Syria leaving his wife and seven children behind. A video call on his mobile is the closest he can get to his family at present, but he dreams of the day he will be reunited with them, outside of Syria, where he describes life as ‘very grim.’

You will also see Rajaa and her 10-year-old daughter. Rajaa fled Aleppo in Syria with her two oldest children and spent two years in a refugee camp in Greece before she reached Northern Ireland. She wipes away tears as she speaks of her other two children, aged seven and four, who remain in Syria with their father and his new wife.

They are difficult stories to hear, but the smiles on the faces of Masoud, Rajaa and the many others who came along that day bear testament to the value this initiative by St Colman’s is having on the lives of those it reaches out to.

We will have a full report on the project and the people is supports in the summer issue of the diocesan magazine Connor Connections which will be available in June.