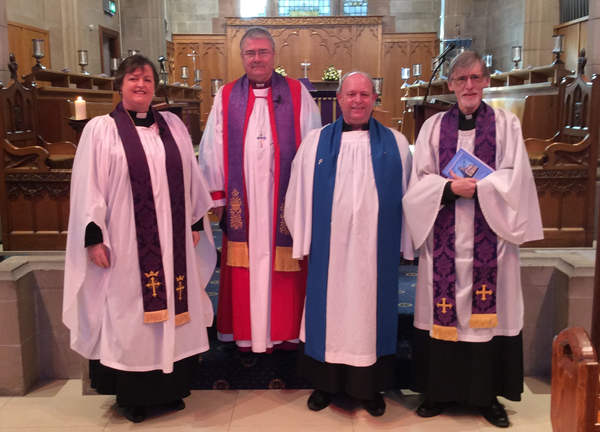 The Archbishop of Armagh, the Most Rev John McDowell, commended St Polycarp’s Church, Finaghy, as ‘a family where people feel at home with one another, responsible for and caring for one another in the name of Jesus Christ.’

Archbishop McDowell was the celebrant and preacher at a Thanksgiving Service of Holy Communion on Passion Sunday, April 3, to mark the 90th anniversary of the consecration of St Polycarp’s.

The church, one of the last major works designed by Percy Morgan Jury, was built in the late Gothic style and consecrated on Saturday April 2 1932 by the Bishop of Down, Connor and Dromore, the Rt Rev Charles TP Grierson.

It is thought that the then Archdeacon of Connor, the Ven John Frederick MacNiece (father of the Irish poet and playwright, Louis MacNeice), was instrumental in choosing Polycarp to be the patron saint of the new church. Polycarp was Bishop of Smyrna, now known as Izmir, in present-day Turkey, and was martyred in 155AD.

The church was built to cater for the rapidly-growing population in that part of south Belfast in the early 1930s and down the years it has become a familiar landmark on the Upper Lisburn Road, close to the Finaghy crossroads.

Since 2009, St Polycarp’s, along with the Church of the Epiphany (on nearby Sicily Park), has formed the grouped parishes of Finaghy and Upper Malone.

Welcoming a large number of present and former parishioners and friends, the rector of the grouped parishes, the Rev Louise Stewart, described the day as a ‘joyous and very special occasion of thanksgiving and celebration.’

Taking part in the service were the rector, who read the Gospel; Victor Stephens, Connor Diocesan Reader in the Church of the Epiphany, who read the Old Testament lesson; the Rev Clifford Skillen, rector of Finaghy, 1996-2009, who read the Epistle; and Heather Breene, a member of St Polycarp’s Select Vestry, who led the intercessions.

The choir, led by St Polycarp’s Director of Music, Simon Neill BEM, sang Philip Stopford’s composition of the anthem, O How Glorious is the Kingdom.

Archbishop McDowell started his sermon with a personal touch: He was returning to the church where he and his wife, Mary, were married and he recalled that his late father-in-law, the Rev Ross Jackson, was rector of Upper Malone, when it was a separate parish, from 1962-1966.

The Archbishop thanked ‘those before us and in the present day for making the parish what it is – a worshipping community and in good heart in every respect.’

It was in this church, he added, that the family of Christ encountered ‘the holiness of God in weekly worship, in the sacraments, in hearing the scriptures proclaimed and in fellowship with one another, and from where we are sent out to be where God wants us to be.’

He used the Gospel reading – the story of Mary anointing Jesus’ feet at Bethany – as an example of a church’s ‘generosity, graciousness and goodness – and all to the glory of God.’ 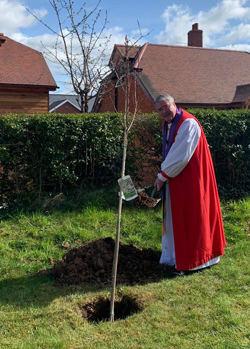 Archbishop McDowell plants a commemorative tree in the grounds of St Polycarp’s.

Following the sermon, Archbishop McDowell dedicated a number of gifts presented to the parish by families and friends in memory of loved ones and former parishioners.

After the service, members of the congregation went outside for a short, commemorative tree-planting ceremony by the Archbishop, the rector and the churchwardens beside the church’s two Gardens of Remembrance.

The anniversary celebrations concluded with a buffet lunch served in The Canon Butler Hall.

Reflecting on the occasion, the rector commented: “After the rollercoaster of the last two years, it was an uplifting service, a wonderful and fitting way to mark and celebrate our 90th anniversary.

“It provided an opportunity to reflect on the witness and service given by our predecessors and also inspired us to rededicate ourselves to the worship of Almighty God and the service of his church and people in this parish.”

Report by the Rev Clifford Skillen