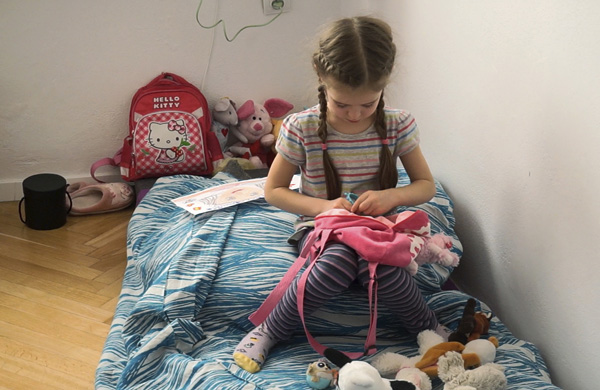 Alisa, 5, sits in the bedroom of a Warsaw apartment that Habitat for Humanity Poland helped secure as part of a partnership with the city to house refugees from Ukraine. When fleeing central Ukraine, Alisa’s mother said she could fill one backpack with whatever she wanted. She chose her favorite stuffed animals. Photo credit: Habitat for Humanity.

The Church of Ireland’s Bishops’ Appeal for World Aid and Development is releasing further funding in both Euro and Sterling in support of humanitarian efforts in Ukraine and the surrounding countries.

Donations continue to pour in, and Bishops’ Appeal therefore anticipates releasing more funds shortly after Easter.  Financial support is being utilised as soon as it is received and even in anticipation of being received, such is the need. 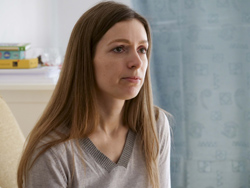 Marina, who fled bombing in central Ukraine with her two daughters, sits a Warsaw apartment that Habitat for Humanity Poland helped secure for the family as part of a partnership with the city to house refugees from Ukraine. Photo credit: Habitat for Humanity.

Partner agencies continue to focus on people who have been displaced within Ukraine and who have become refugees in Romania, Hungary, Slovakia and Poland. They are providing both temporary shelters and longer-term accommodation, food, money and vouchers, help with travel, and medical supplies, and are responding to more specific needs as they arise.

So far, 10 million people have fled their homes – 3.5 million fleeing to other countries and a further 6.5 million displaced in Ukraine itself. This makes up nearly one quarter of the country’s population.

Bishop Ferran Glenfield, Bishop of Kilmore, Elphin and Ardagh and Chair of the Bishops’ Appeal Advisory Committee, said: “Irish people north and south are known for being big hearted. The plight of the Ukrainian people has touched many hearts, which is reflected in the generous response to the Ukraine Appeal across the Church of Ireland.”

A selection of short videos provided by Habitat for Humanity, ACT Alliance, and the Anglican Diocese in Europe from their responses to the crisis is available on the Church of Ireland YouTube channel.

Readers can find out more about Habitat for Humanity’s response in Eastern Europe at www.habitatni.co.uk/ukraine and www.habitatireland.ie/ukraine and the work of Christian Aid’s partners in the ACT Alliance at www.actalliance.org/news. 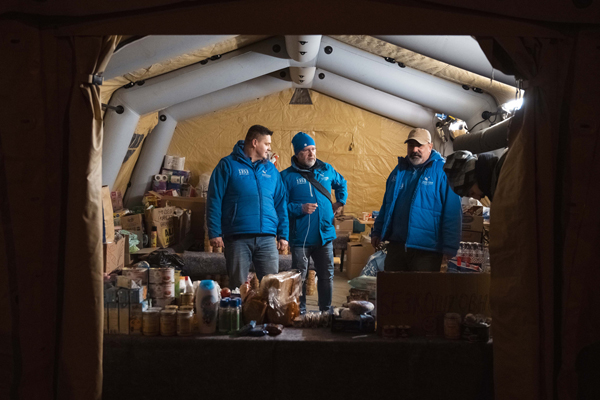 Finn Church Aid’s partner on the ground Hungarian Interchurch Aid’s help point in the small village of Barabás in eastern Hungary. HIA provides snacks, drinks and toiletries to Ukrainian refugees. The small village of 700 people has come together to help refugees: organizations, local volunteers and authorities are working together to get refugees across the border and to provide the support they need. Photo credit: Finn Church Aid/ACT Alliance.

Bishops’ Appeal previously released €10,000 and £8,300 in March in its initial response to the suffering caused by the war in Ukraine.  Anyone can contribute to the response by making a donation, in Euro or Sterling, in one of the following ways:

Taxpayers can give more help by gift aiding donations (if resident in the UK) or tax relief on donations (in the Republic of Ireland).  The appropriate forms and further details on how to give are also available at www.bishopsappeal.ireland.anglican.org/give