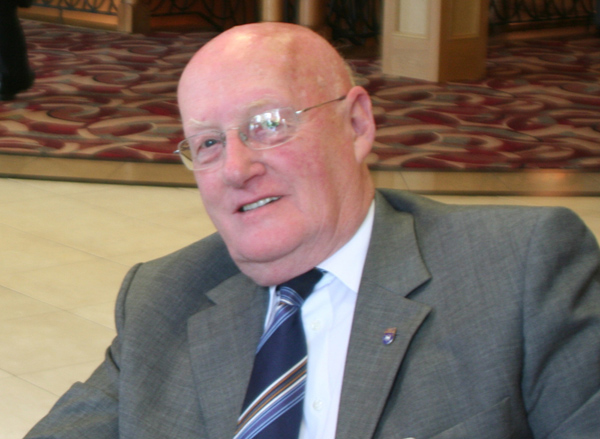 Ballysillan parishioner George Briggs who was nominated for the Royal Maundy by Bishop George Davison.

Congratulations to George Briggs, a parishioner of St Mark’s Parish Church, Ballysillan, who was presented with the Royal Maundy at a service in Windsor on Maundy Thursday, April 14.

The event was attended by Prince Charles and the Duchess of Cornwall after Buckingham Palace announced The Queen wouldn’t be taking part this year.

As is tradition, the Royals gifted Maundy Money to retired pensioners in recognition of their service to the church and to the local community.

George Briggs was nominated by the Bishop of Connor, the Rt Rev George Davison, who also nominated a member of the Roman Catholic Church, Mary Waide.

Bishop George said: “Mr George Briggs has faithfully served the people of his local community, his parish and the wider Church of Ireland.

“He has given of himself in many ways, serving as a representative on Diocesan and General Synods for many years, as well as being a valued member of the Connor Diocesan Council and a number of its subcommittees.

“In addition to the numerous roles he has held over the years in his home parish of St Mark’s Ballysillan, George played a key part in the life of St Columba’s, Whiterock, in recent times. Following the rebuilding of that church, he chaired the Management Committee as a diocesan representative.”

The Bishop continued: “Outside his church commitments, George has served on the boards of a number of local charities and organisations which have benefited from the skills acquired through his business career.”

Bishop George’s other nominee, Mrs Mary Waide, is on the regional board of the St Vincent De Paul and has done charity and diocesan work with the Diocese of Down and Connor for more than 40 years.