A major gathering of 100 delegates across several of Ireland’s Churches met at the Dromantine Centre, Newry, on April 8 to consider their role and way forward in response to the current environmental crisis.

The Irish Churches Creation Care Conference was organised by divestment campaigner Stephen Trew and sponsored by the Church of Ireland’s Church and Society Commission with the aims of deepening understanding of the theology of creation care and developing missional opportunities to put this in practice locally.

The conference was opened by Canon Andrew Orr, Chair of Eco–Congregation Ireland, who remarked that it was ‘up to us as Churches to take real, practical action’ to reduce carbon emissions, increase biodiversity, expand our mission and connect communities, for example through a shared interest in environmental issues.

Distinguished climate scientist Professor Katharine Heyhoe brought a motivational introduction by Zoom, noting that – if global problems could be likened to a series of buckets – climate change is not just another one but the hole in each of them, and that ‘it quite literally affects every single other thing at the top of our priority lists.’

People ‘have the values that they need to care’ with most of us being worried about global warming but not knowing what to do about it.  Prof Heyhoe quoted 1 Timothy 1.7 – “For God has not given us the spirit of fear; but of power, and of love, and of a sound mind” – to speak of our ability to act out of love and make good decisions, using our voices to advocate for others and seeking solutions.

An exploration of the goodness, glory and goal of creation then followed with Dr Chris Wright taking the audience on a journey through Scripture and drawing out God’s relationship with all that he has made.  “A good creation reveals a good God through his handiwork,” Dr Wright said as he highlighted the intrinsic value of creation; Old Testament passages reflected God’s care of wilderness land which had no obvious economic value. 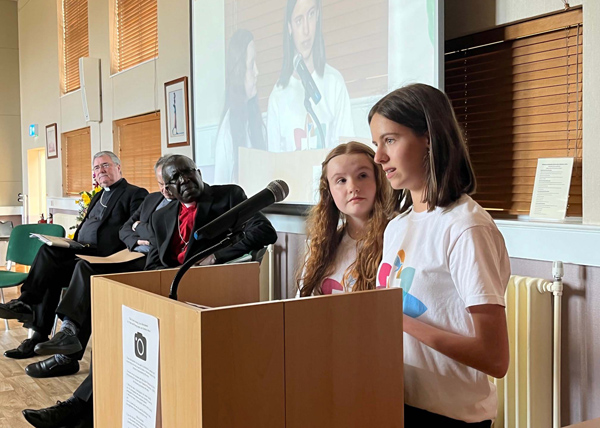 Tori and Isabella address (and impress) the delegates.

Dr Bruce reflected on his recent conversations about environmental issues with farmers, including around nitrates, land management and soil quality, and the need to keep a balanced perspective, avoiding the extremes of the worship of and the exploitation of Creation.  Dr Yambasu explained that the raw materials for electric cars and wind turbines were usually sourced from the developing world, and suggested that consumers consider paying a premium to restore land damaged by mining for those materials.

Archbishop McDowell saw the Church’s job as to persuade, which was in keeping with the Gospel and the respect which Jesus had for a free response from people.  The context was changing a culture in the long run, bearing in mind that there are 25,000 small farmers in Northern Ireland alone who love their way of life and work but are often “caught in the middle” in terms of environmental policy.

Bishop Hayes provided an update on putting Laudato si’ into practice in an Irish context, including the decision by the Irish Episcopal Conference in 2018 to divest from fossil fuels within five years and encouraging communities and groups to describe their vision for the care of the Earth and to measure progress in accordance with their goals (through self–assessment).

All those attending were moved and inspired by a talk by two young people from Tori and Isabella, two secondary school students who help to lead the ‘Lighten Our Darkness’ initiative in Mullingar Union of Parishes, Co. Westmeath.  The young people were preparing for a dramatic presentation on Palm Sunday (April 10) to show the importance of action to care for the environment, conversations with others in the community on reducing waste, and a project – with the theme of ‘God’s Gardens of Hope’ – to improve biodiversity in 12 local churchyards.

In closing remarks, Archbishop McDowell noted that the Covid–19 pandemic had increased public understanding of and respect for science and Churches were following the science in acting against climate change.  Prayer, he continued, is bringing the presence of God into situations and a change in culture – achieved through our own efforts and by prayer – is always miraculous.  The Archbishop closed the conference with an intercession from the Book of Common Prayer on Creation in Christ: “Almighty God, maker of all good things: Father, Lord of all creation, in Christ you have shown us the purpose of your providence, and call us to be responsible in the world.  May we delight in your purpose and work to bring all things to their true end; through Jesus Christ our Lord.”

You can now watch the talks from the conference on YouTube at this link: https://youtu.be/UzJfDH2PPhQ