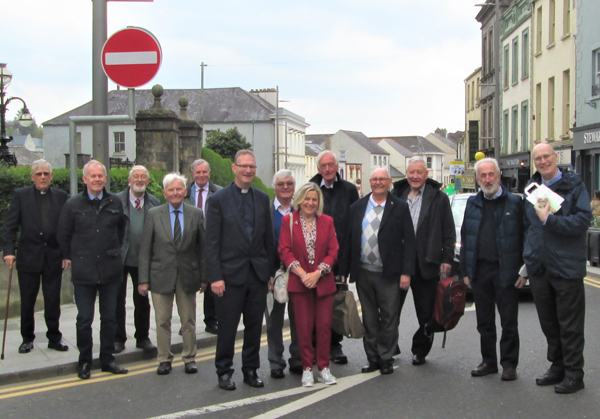 Retired Clergy Association members outside St Michael’s Church, Enniskillen, with Dean Kenny Hall and Monsignor Peter O’Reilly, who were presented with a small gift each on behalf of the association by the Rev Canon Walter Laverty. Photo: Canon Jim Campbell

The Rev Denise Acheson and the Rev Canon John Budd, both previously rectors in Connor Diocese, attended the April meeting of the Northern Ireland branch of the Church of Ireland Retired Clergy Association held in Enniskillen.

Members were welcomed to St Macartin’s Cathedral by Dean Kenny Hall, where the meeting began, before moving across the road to St Michael’s Roman Catholic Church where the hosts were Dean Hall and his neighbour Monsignor Peter O’Reilly.

Last year was the centenary of the elevation of the then St Anne’s Parish Church to Cathedral status, and its rededication to the memory of St Macartin. This year, it is the quartercentenary of the founding of Enniskillen Parish, and the Cathedral was undergoing renovations and decoration on the day of the Retired Clergy Association meeting, prior to anniversary celebrations beginning on May 15.

St Michael’s Church, immediately across the road, is also impressive, but in a different way, particularly with its beautiful wall paintings.

The two clergymen spoke of their and their congregations’ growing relationship over the years, since their arrival within a short time of each other shortly before the 25th anniversary of the Enniskillen Rememberance Day bombing, and also of the Royal visit to the town in 2012, which included both churches.

They spoke of shared invitations and engagements since then, including invites to Buckingham Palace and Windsor Castle.

This was a most interesting and enjoyable visit.