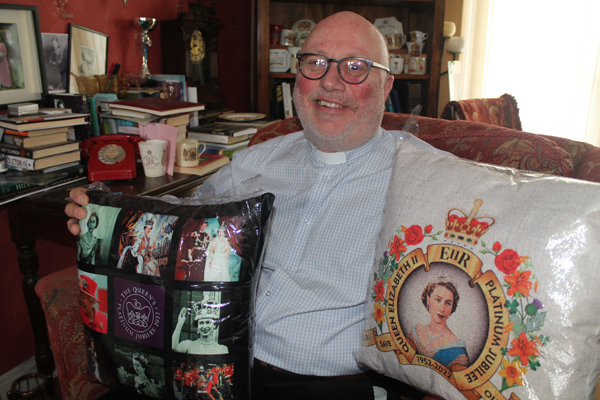 In honour of the Queen’s Platinum Jubilee, Drummaul Parish Church will host a right Royal exhibition from May 13-22.

The church will be full of memorabilia collected over the years by the vicar of Drummaul, Duneane and Ballyscullion, the Rev Canon Derek Kerr.

Plates, jugs, saucers, photographs, cushions, photographs, paintings, framed letters from Buckingham Palace and much more will soon be packed and transported from the vicarage to the church.

Enthusiast Derek has been collecting all things Royal for the past 30 years, and has gathered around 500 items, the oldest a jug and some crockery dating back to Queen Victoria’s days. 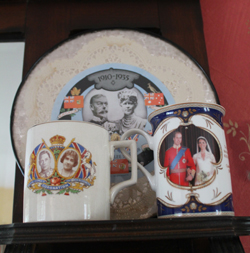 His passion for Royalty can be traced back to his childhood. “As a small boy I loved historical characters, especially fantasy characters like King Arthur and the Knights of the Round Table,” Derek explains

“It was with King Arthur that my love of other worldly stuff began – old houses and National Trust properties and a real fascination with the Royal family. Some of my good friends called it delusions of grandeur!”

A native of Dungannon, Co Tyrone, Derek was ordained in 1990. He gave what he refers to as his first ‘Royal Talk’ during his second year of his curacy in St Donard’s Parish, Belfast, when he and his fellow team member, politician Jeffrey Donaldson, spoke at a Summer Madness debate against the argument: ‘This house believes there is no future for the monarchy’ – a debate which they won.

Since then, he has done an average of 10 talks a year.  As well as collecting Royal memorabilia, Derek takes every opportunity he can to attend Royal events.

His first was the Queen Mother’s 100th birthday in 2000, when he positioned himself between Clarence House and Buckingham Palace. In 2002, Derek was a guest at a Garden Party in Loughry College in Cookstown to mark the Golden Jubilee. On this occasion he, in his own words, ‘circumnavigated three bodyguards to walk up to her [the Queen], take her hand, bow and thank her for coming.’

He was in Windsor for the Queen’s 80th birthday in 2006, in 2011, when Prince William married Kate Middleton, Derek spent the previous night on the Mall where he found ‘an excellent spot’ to catch a glimpse of the bride and groom and the other Royals.

To mark the Queen’s 60th anniversary of her reign in 2012, Derek hosted his Royal exhibition at Drummaul Parish Church, with proceeds going to parish funds and to the NSPCC. Three years later, Derek again hosted an exhibition to celebrate Her Majesty becoming the UK’s longest reigning monarch. This raised £1,300 for Tabiro School in Uganda which Drummaul, Duneane and Ballyscullion had built through Fields of Life.

The Rev Canon Derek Kerr with some of the crockery which forms part of his Royal collection.

His extensive collection includes items relevant to the Royal family past and present, and includes china commemorating Queen Victoria’s 60 years on the throne; a miniature photo book of Royals from bygone days; a plate marking the Silver Jubilee of King George V in 1935; and new souvenirs of this year’s platinum jubilee – cushions and gold plated teaspoons.

But pride of place goes to a very unlikely object – a baby’s rattle which once belonged to his late mother, and commemorates the Silver Jubilee of King George V and Queen Mary in 1935.

It will raise funds for the parish, with 10 per cent of monies donated going to the Salvation Army in memory of the late Aurelia Kelly.

Then Derek will head to London to enjoy the events of the Platinum Jubilee Weekend which runs in the capital from June 2-5.

You can read more about Derek’s passion for all things Royal in the summer issue of the diocesan magazine Connor Connections which will be available in June. 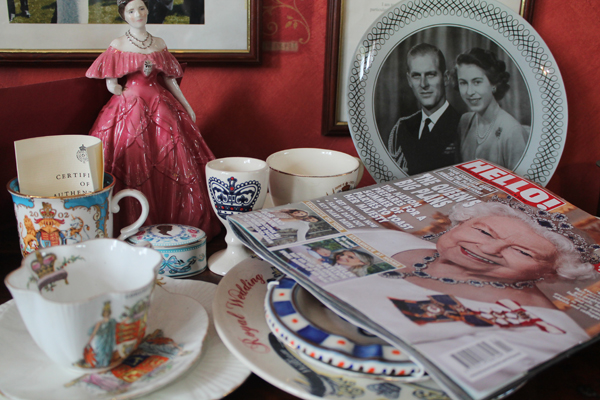