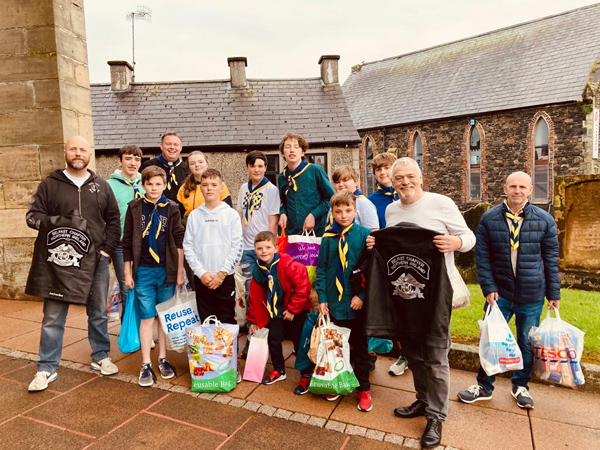 Kenny and Gerard and members of 5th Antrim Scouts load up their van with all the gifts donated by parishioners and families of the Scout troupe.

Kenny Campbell, a parishioner of All Saints’ Parish Church, Antrim, is making a 3,200 mile round trip to take vital supplies to a Ukrainian refugee camp in Medyka, Poland.

Kenny and his friend Gerard Hughes are members of the Belfast Harley Davidson Owners’ Group (HOG).

They leave Antrim on Wednesday evening, May 18, travelling to Dublin to catch the Holyhead ferry. Then, en route to Harwich, they will team up with HOG chapter members from England and Wales. 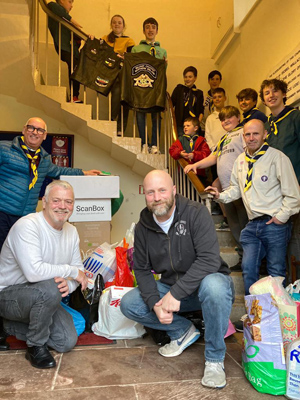 Their journey will take them from Holland, through Germany and finally to Poland. Along the way Kenny and Gerard expect to be joined by more than 50 Harley Davidson bikers.

Kenny spoke about his upcoming trip to the congregation of All Saints’ on Sunday May 15 and was overwhelmed by the subsequent deluge of items and money for the refugees in the camp.

Kenny and Gerard met with the members of 5th Antrim Scouts on Tuesday evening, May 17, to load up their van with all the gifts that had been donated by parishioners and families of the Scout troupe.

Kenny commented on how he delighted he had been with the response to his trip and especially the generosity of local branches of Asda and Boots, Trespass and the Entertainer Toy Shop, as well as the families of pupils at Doagh and Carnmoney Primary School. Stena have kindly donated ferry tickets and their van was donated by Bridge Commercials.

Kenny is making a daily video blog and will be back in All Saints’ on Sunday June 5 to speak about his trip.