Menu
Home > News > Along with Her Majesty, Cloughfern celebrates its own 70 years!

Along with Her Majesty, Cloughfern celebrates its own 70 years! 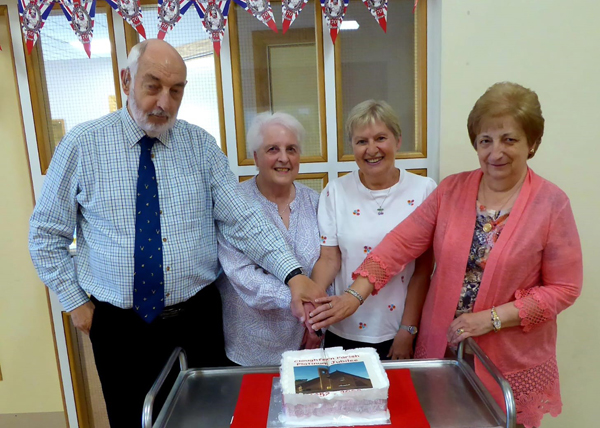 Her Majesty the Queen’s Platinum Jubilee celebrations were all the more special in Cloughfern Parish as it was also marking its 70th anniversary over the weekend of June 4-5! (Photo Gallery below).

Back in 1951, intending parishioners of the newly-formed Parish of Cloughfern met in a converted barn in Fernagh Estate.  Services and Sunday School were held in this venue for approximately a year and a half, until the new Church of the Ascension, Cloughfern, was built in the form of a dual purpose hall.

The church was formally dedicated by the Bishop, the Rt Rev Charles Irwin, on Ascension Day, May 24 1952.

In 1953, it was decided to start work on a parochial hall, which was built mainly by volunteer labour.  The work was completed in around 18 months. After a complete redecoration, and the installation of a stained-glass East window, the church was formally consecrated on May 21 1955.

Since then, Cloughfern Parish has had five incumbents, eight curates, and a number of trainees/students on placement.

The celebrations began on Saturday June 4, with a Platinum Jubilee lunch in the church hall, attended by some 75 parishioners, family and friends.  After a selection of drinks on arrival, the anniversary cake was formally cut by Tom Fulton, Maebeth Wilson, Christine Hunter and Eleanor Robinson, all children of founder members of the church.

This was followed by a buffet lunch and a special display of biscuits decorated for the church’s jubilee by the children in the Sunday School.  Souvenir Platinum Jubilee pens and commemorative Queen’s Jubilee keyrings were given out to everyone – the children had also helped to put together the keyrings.

A slideshow of photos old and new, reflecting 70 years of church activities, ran throughout the afternoon, and the event ended with a Royalty Jubilee quiz – no prizes, but some folk were very competitive!

On Sunday June 5 there was a special service in celebration of the Jubilee, when parishioners remembered and gave thanks for the service and dedication not only of the Queen, but also of those in the parish who have given of their time and energies over the last 70 years.

Special flower arrangements for the service, and also for the lunch, were made by Edith Clifford, assisted by husband John.