‘Courage to Lament’ at Belfast Cathedral 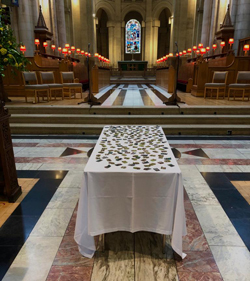 Belfast Cathedral hosted Courage to Lament, an ecumenical service held as part of a Day of Reflection on Tuesday June 21

The Day of Reflection was held on the longest day of the year, because, co-host the Corrymeela Community stated, there is no day that has not been marked by violence.

Using the biblical practice of lament, the service offered a space to reflect on the conflict in and about Northern Ireland and on the future.

Courage to Lament sought to create a space for people to acknowledge deep hurt and pain, to reflect on what they might have done or might still do, and to commit to ensuring such suffering and loss never happens again.

Anyone who couldn’t be there in person can watch the livestream on YouTube here. (Service begins at minute 13).

The powerful service included a recording (with his permission) by Richard Gowers performing Where the Birds Sing by Grace Evangeline Grace Mason, which was composed for the Commission of Victims and Survivors. This was played as those present collected small patches of cloth as an act of remembering.