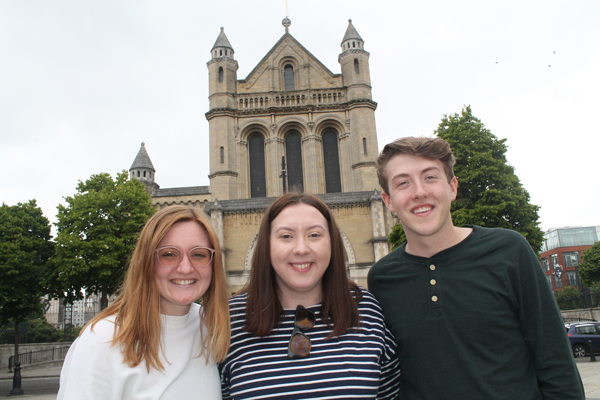 Meet Kyleigh and Preston Vaughn, two young visitors from the USA who have opted to spend their ‘sort of honeymoon’ doing an internship in Connor Diocese with Diocesan Youth Officer Christina Baillie (pictured centre).

Twenty-year-old Kyleigh and Preston, 21, married last March after a whirlwind 10-month romance – although they were best friends for a year before that, having met at Bible College where they are both half way through a four-year course in Christian Foundation.

This is Preston’s second visit to Northern Ireland – he was a member of the Christ in Youth team which joined young people from Connor for Summer Madness and Streetreach in 2019. He had hoped to return with the Christ in Youth team in 2020, but the pandemic prevented that, and so he was delighted when Christina said yes to his request to do his internship for college in Connor Diocese, along with Kyleigh.

The couple arrived on May 30 and will be here until the end of July. As visa restrictions mean they can only volunteer for 30 days of their trip, their itinerary includes some ‘honeymoon’ time.

They spent their first week recovering from jet lag and getting to know Belfast while staying at Belfast Bible College, their second week was spent relaxing in Bushmills and exploring the beautiful north coat, and they joined the Rev Andy Heber and parishioners of Carnmoney for their third week.

During the week, they got to know parishioners at a coffee morning, led a Wednesday Bible Study, and preached on the Sunday morning. They also attended diocesan synod on the Thursday. They were accommodated by Rev Andy and also by a local family. 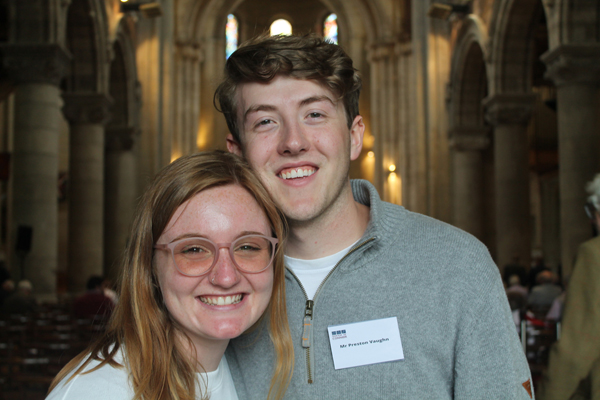 Kyleigh and Preston at Connor Synod in Belfast Cathedral.

“Everyone has been very kind, we have been well fed and well kept,” said Kyleigh.

The couple are currently staying at The Hub chaplaincy at Queen’s University, and are looking forward to joining the Connor sub-camp for the annual Summer Madness Festival, this year taking place for the first time in Portglenone from July 1-5.

They will then head to Mossley Parish with the young people for Connor Streetreach, back for the first time since 2019, and running from July 5-8. Kyleigh and Preston will lead the morning devotionals at Streetreach.

After the excitement of all that, the couple will have a week’s break in Fermanagh, and over the next few weeks they hope to spend a bit more time on the fairways of Northern Ireland, where Preston can continue to introduce Kyleigh to golf, a passion he inherited from his father.

The couple will be back at College two weeks after they return to the States – we hope to catch up with them again later in their stay.