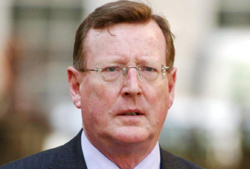 The Most Rev John McDowell, Archbishop of Armagh and Primate of All Ireland, has made the following statement on the death of Lord Trimble.

“The death of Lord Trimble has removed one of the major figures in the political life of Northern Ireland and of these islands. In an age where leadership has become thinned out and almost paralysed by slavish attention to shifting opinion, David Trimble represented a different sort of politician.

“Although unshakeable in his allegiance to the Union, he was one of the first unionist leaders for whom the word ‘agreement’ had positive moral, social and political value. David Trimble had perhaps the greatest of public virtues – courage: Both the courage of his convictions and the courage to acknowledge the heartfelt and sincere convictions of others. He had also a forensic quality of mind and an aptitude for attention to detail which went far beyond the merely lawyerly.

“The path of the peacemaker, by its nature, is never an easy road to tread. It was the conviction that hard political and moral choices, accompanied by much personal sacrifice, would lead to a reconciled and better future that led David Trimble, the late John Hume, and many others to take the lead in building a better future for all in Northern Ireland.”