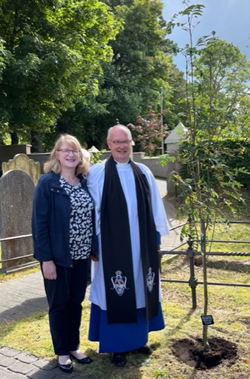 The Rev Canon Mark Taylor and his wife Frances.

The Rev Canon Mark Taylor was treated to a surprise celebration following morning prayers at St John’s Church, Islandmagee, on August 21 – the 20th anniversary of his incumbency.

As Mark concluded the morning service, organist Loreto McAuley unexpectedly struck up the well-known tune Congratulations, made famous by Cliff Richard back in the 1960s, and the congregation clapped in time to the music.

After some words of appreciation and thanks for all that Mark and his wife Frances have done for the parish, the couple were presented with gifts by members of the vestry and congregation. Mark was then invited to go out to the churchyard to plant a rowan tree to commemorate this special anniversary.

When Mark was told he deserved a medal for his service, he replied, ‘It’s the congregation that deserve the medal!’

Following the tree planting ceremony everyone, including members of Mark’s immediate family, gathered back In St John’s for refreshments and a good time was had by all. 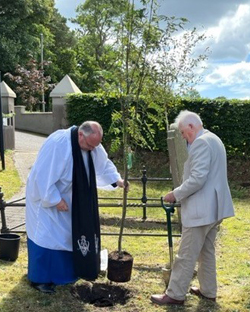 Planting a tree to commemorate Mark’s 20 years as rector. 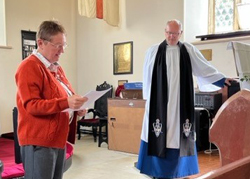 A surprise for the Rev Canon Mark Taylor from his parishioners.