Canon travels to London to say goodbye to ‘dear Queen’ 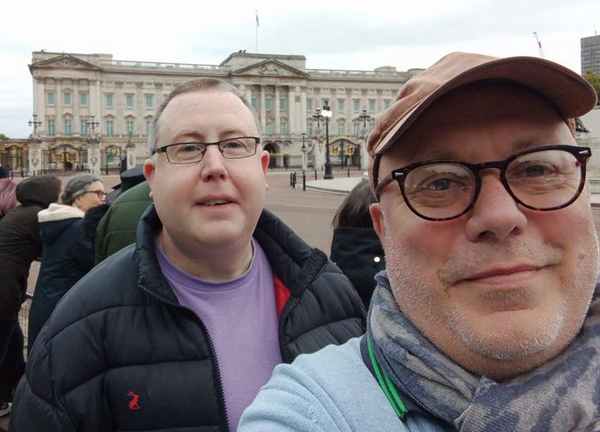 The Rev Canon Derek Kerr and the Rev Jonathan Sloan outside Buckingham Palace on the day of the Queen’s funeral.

Royal enthusiast the Rev Canon Derek Kerr, has returned from London where he watched the procession which formed part of the funeral service of Queen Elizabeth II on September 19.

After taking his Sunday morning services – attended by a UTV camera crew – Derek and his friend, Moneymore Presbyterian Church minister, the Rev Jonathan Sloan, boarded a plane from Belfast to Luton Airport.

Although they didn’t arrive in time to attend the Queen’s lying in state at Westminster Hall, they were able to secure their spot outside Buckingham Palace and join the crowds also paying their respects.

“It was really important to be there,” Derek told Belfast Live. “For me and many others around us, we were there to pay our respects to a woman who gave us everything.

“Jonathan and I had made a promise that we would go to the Queen’s funeral. Logistically we didn’t think we’d make it, but we were at the top of the Mall at around 6.30am where there were already fantastic crowds there to say goodbye to our dear Queen.

“Suddenly the barrier around Buckingham Palace was opened and we got to stand just opposite the Palace. It meant that the King and the other members of the royal family and, more importantly, Her Majesty’s coffin, were very close.”

On The Mall and in front of Buckingham Palace where Derek and Jonathan were standing, the Queen’s funeral was played through tannoys to the wide range of ages gathered there.

Crowds lining The Mall broke into spontaneous applause after the national anthem was played at the funeral. Before that, they had stood quietly with their heads bowed during the two-minute silence.

Members of the royal household, clad in black, lined up along the front of Buckingham Palace before the coffin was brought along in procession past the Palace for the final time on its way to Windsor.

They joined members of the Guards, drawn from various regiments, who were also arranged around the Victoria Memorial and along The Mall.

“The atmosphere was just amazing and I’ve never heard London so quiet in my life,” Derek added.

“The stillness and silence at the palace was such a tribute in itself. This was a time for private thoughts and everyone was so dignified.

“We weren’t in a position to see the King or other members of the Royal Family close up but I realised this was a good thing because we weren’t there to wave at them or be jolly.”

Derek has travelled to London many times to see the late Queen and members of the Royal Family. He has been a Royal fan since he was just a boy, and last May put his extensive Royal collection on display in Drummaul Parish Church as part of the celebrations for the Platinum Jubilee. Derek speaks about his passion for the Royal Family in the summer issue of Connor Connections – you can read the feature HERE. 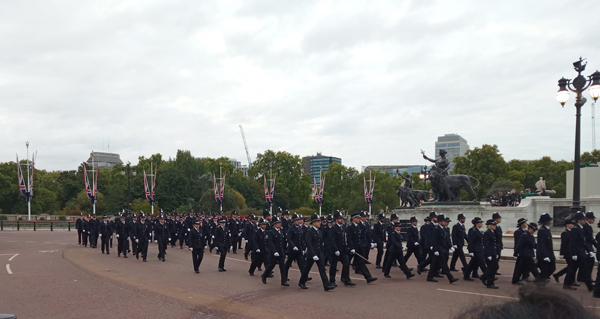