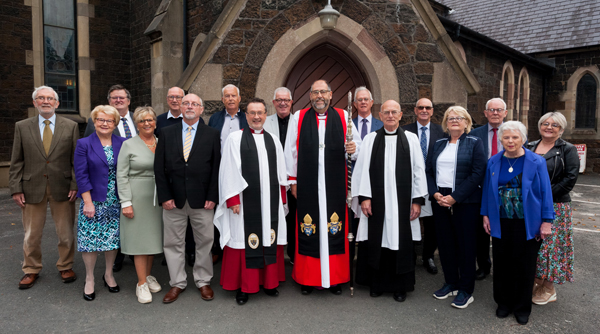 Celebrating the completion of the Christ Church, Lisburn, Tower Project. Bishop George Davison is in the front row, flanked by Archdeacon Paul Dundas, left, and the Rev John Pickering.

A Thanksgiving Service for the completion of the Tower Project in Christ Church Parish, Lisburn, was held on Sunday September 25, led by the rector, Archdeacon Paul Dundas.

The service began with the introit by the parish choir ‘In this holy place we meet,’ by RS Bambrick and conducted by the organist, Ross Morrow. This was followed by the saying of part of Psalm 103 with a congregational thanksgiving response. The congregation joined in the hymn ‘To God be the glory.’

The update on the Tower Project was introduced by Mr Stevie Long on behalf of the Select Vestry as he outlined the four years of the project, thanked parishioners for their generosity in a project estimated now at £310,000, and the team who brought the project to completion, from Robert Bleakney as the architect and S McConnell as the contractor. He then introduced a video of the project produced by Chris Dougherty. The full video can be viewed HERE.

The Dedication of the Tower took place on September 1 when the Bishop of Connor, the Rt Rev George Davison, along with the rector, architect, site manager and vestry members Stevie Long and Eric Thompson, climbed to the top of the scaffolding and conducted an act of worship. This was then shown as a video to all present. 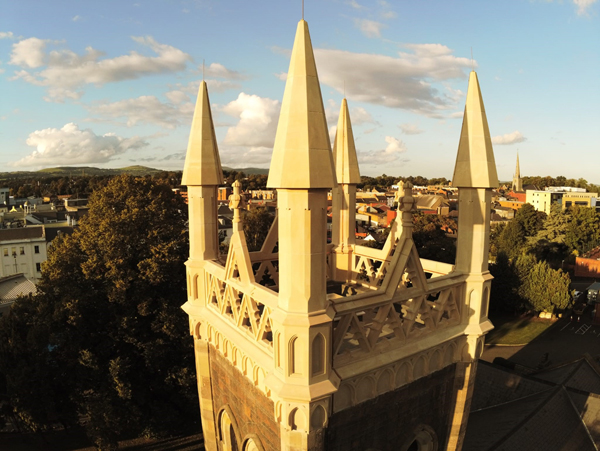 View from the newly renovated tower of Christ Church, Lisburn.

The Bishop led the dedication in memory of parishioners and family whose names are recorded on a plaque in the church porch. The scripture readings were from 1 Kings 8: 14-21, read by Thomas Ringland and 1 Peter 2: 4-10 read by Valerie Christy, members of the Select Vestry.

Bishop George then spoke to the children before they went out to Sunday School. He talked about the tower being finished, the bells, views from the tower, where God’s family meet for worship and telling forth the good news. He prayed for the children as well as a group of eight young people who were attending Connor takes the Castle at Castlewellan Castle.

In his sermon, Bishop George spoke about a project ‘well done’ which is a cause of thanksgiving but giving glory to God as he reflected on 1 Kings 8. He challenged the congregation to be ‘living stones’ as Peter speaks about in 1 Peter 2, to bear testimony to God’s name, being built together as a community who are loved and forgiven but who reach out.

The additional hymns were ‘All creatures of our God and King,’ ‘In Christ alone,’ ‘I stand amazed in the presence of Jesus the Nazarene,’ and ‘Now thank we all our God.’ The prayers were led by vestry members Mervyn Dougherty, Beth Harris and Janice Thompson.

The offering was for the Tower Project. The Bishop led the congregation in a dedication and commission before pronouncing the Blessing.

The congregation moved to the hall for a soup lunch to celebrate the completion of the project.