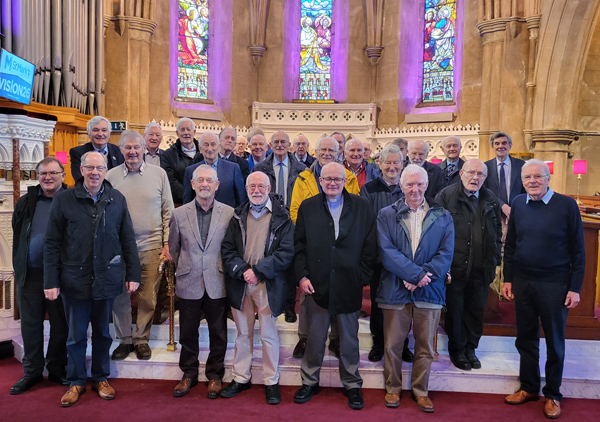 The joint meeting of the Retired Clergy Association (Northern Ireland) and the Dublin and Glendalough Retired Clergy Fellowship – the first since the onset of the Covid pandemic – took place at the end of October in St Mark’s, Portadown.

Following refreshments in the parochial hall served by the ladies of the parish, who later also provided a delicious light lunch, the day began with a Service of Holy Communion in St Mark’s, celebrated by the Archbishop of Armagh, the Most Rev John McDowell, assisted by the rector, the Rev William Orr.

The Archbishop’s address after lunch covered a wide range of current issues.

Referencing the Lambeth Conference held in July/August, he said that some had incorrectly foreseen the Conference as the death-knell of the Anglican Communion. Human sexuality occupied a less-central place than before, with a greater emphasis on environmental issues which, the Archbishop said, were very spiritual matters and we had a duty to creation and to future generations. He wondered whether the Church of Ireland needed a creation-related property and buildings policy.

The Archbishop believed that Brexit had caused tremendous disruption in Ireland, creating divergences in North/South world views after a time of closer relationships. The Church Leaders’ Group offered leadership which was more religious and less political than before. Concerning the Week of Prayer for Christian Unity, he said that people needed to talk to each other to discover other people’s perceptions of them.

Archbishop McDowell described Ireland today as being in a ‘time between times.’ He said our Church was unlikely to regain the numbers of former days. Once we had a surplus of clergy, now we had a deficit. He wondered why more people, especially from within our own tradition, were not coming forward for ordination. The clergy may have less influence in society generally today, but perhaps we do not take advantage of the opportunities that we do have, he said.

Those present were stimulated by the Archbishop’s address and also by the chance to renew past friendships.