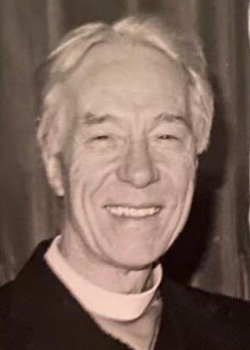 A Service of Thanksgiving for the life of Dean Mervyn Wilson was held in Christ Church Parish Church, Lisburn, on November 23.

Dean Wilson, who was 100, joined Christ Church Parish in 1992 along with his wife Betty after he retired from ministry, all of which had been served within the Diocese of Down and Dromore.

The service was led by Archdeacon Paul Dundas, rector of Christ Church, who preached. Archdeacon Roderic West represented the Bishop of Down and Dromore, and the Rev John Pickering and the Rev Derek Harrington led the prayers of thanksgiving and intercessions.

He was a keen sportsman, continuing his love of rugby, football, cricket and hockey with Sullivan Old Boys. He always had an interest in youth work, serving the Boys’ Brigade.

In the late 1940s, Mervyn felt a strong calling to serve God, and left Belfast to study at Bible Churchman’s College, Bristol, with an idea of missionary work in India. Instead he returned to Belfast having been encouraged to consider the role of parish minister.

Once ordained, Mervyn was curate at St Patrick’s, Ballymacarrett, from 1952-56, where he met Betty, a member of the church choir. He moved to Donaghcloney/Waringstown as curate from 1956-59, marrying Betty in 1957. Their daughter Pauline was born in 1958, and Mervyn did a third curacy at St Mark’s, Newtownards, from 1959-61, when son Geoffrey was born.

Mervyn’s first appointment as rector was to Ballyphillip and Ardquin Parishes in Portaferry from 1961-70. He moved to the Parish of St Patrick, Newry, where he served for 22 years from 1970-1992. During this time, he and Betty had a third child, Andrea.

Mervyn taught religious education at Newry High School, where he is fondly remembered by past pupils.

He was given further diocesan responsibilities as Rural Dean in 1977 and was appointed a canon of Dromore Cathedral in 1983 and then a canon of St Anne’s Cathedral, Belfast, in 1985. In 1990, Mervyn was appointed Dean of Dromore, a reflection, Archdeacon Dundas said, of his dedication in ministry.

After retirement, he and Betty moved to Old Manor House and Christ Church, Lisburn, where he assisted Canon Sam McComb. He was a dedicated and enthusiastic visitor in the parish, leading worship and preaching the Gospel.

“He fitted in so well to being part of the staff team and parish with that humble nature shining through, but he always walked at pace,” Archdeacon Dundas told mourners.

Mervyn continued to play a role in church services until a macular eyesight condition, coupled later with the onset of dementia, meant he wasn’t able deliver his usual quality of ministry.

In all this time, Betty was a faithful member of the choir and Mothers’ Union.

In 2022, Mervyn and Betty celebrated their 65th wedding anniversary, Mervyn the 70th year of his ordination, and his 100th Birthday.

“Mervyn loved his work in Christ and had a great faith and trust in God. He loved life, loved people, and took a genuine interest in them, loved comedy, loved sport, and made dedicated time for his family. He loved and served the Good Shepherd,” Archdeacon Dundas said.

Sympathy is extended to Betty, Pauline, Geoff and Andrea, their spouses and partners Farooq, Perm and John and the wider family circle.