Retired clergy hear of importance of church music in liturgy 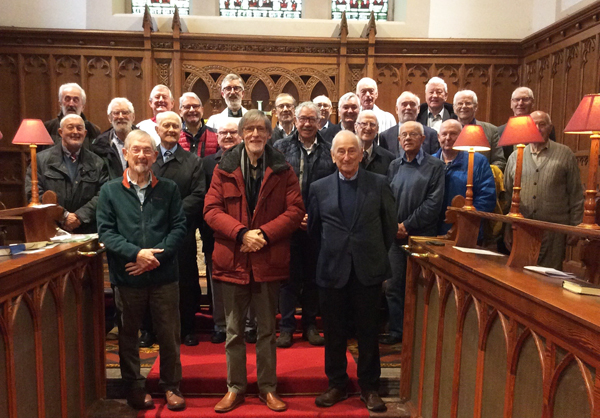 By the Rev Clifford Skillen

The morning began with a service of Holy Communion, celebrated by the rector of Knock, the Rev Canon John Auchmuty, assisted by the RCA (NI) chairperson, the Rev Canon Ken Smyth, who serves as one of St Columba’s assistant priests.

Canon Auchmuty warmly welcomed members and particularly thanked the retired clergy for their invaluable and faithful ministry, of which he himself was continuing to benefit.

Following light refreshments, Canon Smyth introduced the guest speaker, Dr Joe McKee, Organist and Director of Choral Music at St Columba’s, and one of the tutors on the Down and Dromore and Connor Organ Scholarship Scheme. Canon Smyth described Dr McKee’s contribution to choral and instrumental music in the wider Church and beyond over many years as ‘very, very considerable.’

In a personal, comprehensive and fascinating talk on the overall theme of ‘Music in Liturgy,’ Dr McKee began by defining music as ‘an organised system of sounds and silences.’

He traced his musical roots from his days at primary school, through his career in a number of working and musical posts to his present-day position in St Columba’s in which he saw himself as ‘part of a team which provides appropriate music enhancing the liturgy and creating moments of beauty.’

He went on to express the hope that congregations would feel uplifted by church music, challenged by the sermon and prayers, leave church refreshed and, feeling the better for having attended, want to come back again.

Dr McKee also touched on the changes which he had seen taking place in church music: Many churches today don’t use organs; there is a shortage of organists; a shift to praise bands and worship groups often leads to a mismatch between organist and praise groups; and there is a lack of expertise of skilled organ builders.

The Ven John Scott commended Dr McKee for the importance of his contribution to church music and thanked him for a captivating talk of much breadth and depth, presenting him with a small token of members’ appreciation.

Canon Auchmuty also added his thanks to Dr McKee, especially for his faithful membership of the St Columba’s team and his work in enhancing the church’s traditional and musical liturgical worship.