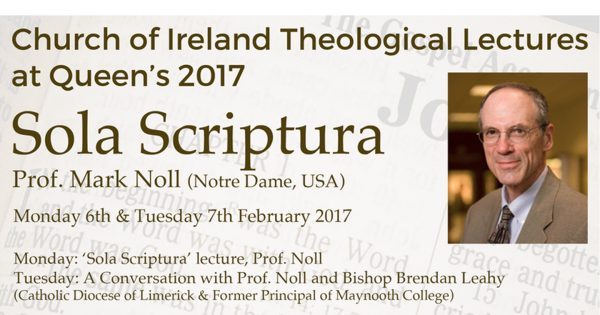 2017 marks 500th anniversary of the Reformation – a seismic and defining moment in Church history. To mark this, our 2017 theological lectures will be delivered by Professor Mark Noll (University of Notre Dame).

In 2005, Mark Noll was named one of the 25 most influential evangelicals in America by Time magazine. As Francis A. McAnaney Professor of History at Notre Dame, Mark is recognised as a leading authority on the history of Christianity in North America, and received the National Academy of Humanities medal from the White House in 2006.

Professor Noll will be speaking on the topic ‘Sola Scriptura’. Expect an overview of historical critiques of Protestant attitudes to sola scriptura (Latin for, ‘by Scripture alone’), counterpointed by the strong gift that the turn to the Bible has made to the church over half a millennium. Mark Noll will delve into the contribution Protestant appropriation of Scripture has made to world Christianity, which may consider the prominent work of Bible translation, as well as lay scriptural appropriation by the likes of Rembrandt van Rijn, Jacob van Ruisdael, J.S. Bach, and other lay men and women.

This year, we have have two evenings: Monday 6th and Tuesday 7th February 2017. On Monday 6th, Prof. Noll will deliver his lecture; then, on Tuesday 7th, he will be joined in conversation by Bishop Brendan Leahy (Catholic Diocese of Limerick, and previously Principal of Maynooth College).

Both evenings will taken place in the stunning surrounds of the Isdell Courtyard at QUB’s Riddel Hall.

Riddel Hall is a short walk from the central Queen’s campus, on Stranmillis Road. There is also some on–site parking available.

To see the map for directions, click on the link here.

Tickets are available via Eventbrite – click here to reserve your tickets.