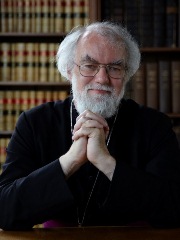 This is the second Annual Lecture to mark the bicentenary celebrations of St George’s.

Lord Williams is currently Master of Magdelene College, Cambridge, and his talk will be followed by a discussion chaired by the Rev Dr Bert Tosh, former senior producer of religion with BBC NI.

Explaining his choice of topic, Lord Williams said: “We hear a great deal about fundamentalism these days.  The word is often used just to mean extreme religious conservatism; but it is a more complex idea and this lecture will attempt to discuss something of its history within Christian thinking and whether it can apply outside this framework.

“I’ll be suggesting that one of the strange things about this apparently ultra-conservative trend is that its origins are in a thoroughly modern frame of thought.

“We may need to think of the opposite of fundamentalism not as ‘modernism’ or ‘liberalism’ or ‘moderate faith,’ but as various forms of thoughtful traditionalism.”

The lecture is not ticketed and is open to all.  A minimum donation of £5 will be sought at the door.

The lecture begins at 7.30pm on Friday April 24, and as it is anticipated that this event will be very popular and spaces are limited, please turn up early to be sure of a seat.