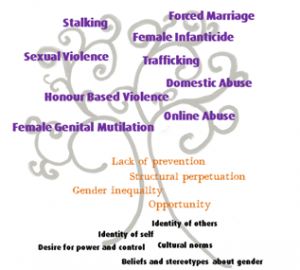 The tree shows the roots of the problem, the issues on the trunk that help it develop and the outcomes on the branches.

The Mothers’ Union in Ireland is taking part in 16 Days of Activism Against Gender Violence, a global movement which speaks out against gender-based violence.

The 16 days begin on November 25 (International Day for the Elimination of Violence Against Woman) and end on December 10 (Human Rights Day).

Mothers’ Union members are hosting Vigils throughout all 12 dioceses in Ireland on Saturday November 28. Members from Connor and Down & Dromore dioceses are sharing in a Vigil in St Anne’s Cathedral, Belfast, from 3pm-6pm.

They invite people to come when they can, leave when they must, as the Vigil remembers all who suffer because of their gender. Speakers from agencies will help participants reflect on important issues affecting women and girls today.

Throughout the world women and girls are subject to many different forms of violence including physical, sexual, emotional and financial abuse. Violence affects women and girls from all backgrounds and happens across all stages of life. It is perpetrated by partners and family members as well as strangers.

Each year, 16 Days of Activism Against Gender Violence unites individuals and organisations to raise awareness of, and call for an end to, all forms of violence against women and girls. Mothers’ Union believes in particular that prevention needs to focus on teaching children and adults about loving and respectful relationships; that there are laws against all forms of violence and abuse and the means to enforce them; that those experiencing violence are supported, and that perpetrators are brought to justice and rehabilitated.

For further information on the Prayer Vigil in St Anne’s Cathedral, please contact Joyce Bond on 028 2586 1215 or visit www.mothersunion.org or www.mothersunion.ie to learn more about the 16 Days intiative.