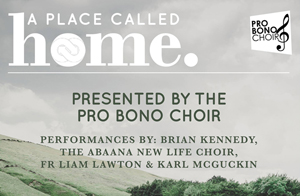 They will be singing with The Pro Bono Choir which has organised a fundraising concert called A Place Called Home in the Cathedral to support the homeless in Belfast, with the proceeds going to the Welcome Organisation.

Formed in 2009 with 50 members, the Pro Bono Choir now has 70 singers who are by profession solicitors, barristers and tribunal members or law students and friends of the north’s legal family.

The Pro Bonos have held several fundraising concerts in the city over the years, on behalf of Action Mental Health and the Northern Ireland Hospice.

Brian Kennedy will perform singles such as A Better Man and his rendition of You Raise Me Up with the choir.

Also appearing will be the fantastically energetic Abaana New Life Children’s Choir from Uganda and barrister baritone Karl McGuckin, who has recently performed in the musical Jekyll and Hyde at the Grand Opera House.