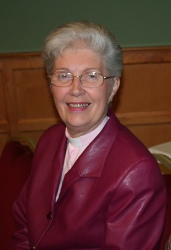 The Rev Canon Kathleen Brown, rector of St Paul and St Barnabas, Belfast, for the past 15 years, has been awarded an MBE in the Queen’s Birthday Honours.

Canon Brown, who is due to retire later this year, received the Honour for services to the community in Northern Ireland.

She and the late Rev Irene Templeton were the first women to be priests in the Church of Ireland when they were ordained by Bishop Samuel Poyntz on June 24 1990.

The former physiotherapist was ordained a Deacon in 1988 and was curate at St Nicholas, Carrickfergus, until she moved to St Paul and St Barnabas as rector in 1992. She was made a Canon in January 2000.