Dedication of plaque in memory of the Very Rev Norman Barr 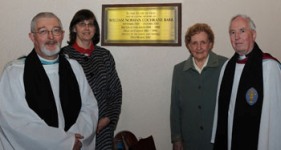 Report and Pictures by John Kelly

A plaque in memory of the Very Rev Norman Barr has been dedicated by the rector of Christ Church, Derriaghy, the Rev Canon John Budd.

The wall plaque was dedicated at a service on the evening of Sunday March 25. The preacher was the Rev Canon Victor Stacey, a curate in Derriaghy during Dean Barr’s ministry, and now the new Dean of St Patrick’s Cathedral, Dublin, (He will be installed there on March 31). The Rev Clifford Skillen also took part.

A noted local historian, he leaves as his legacy several books relating to the history of Derriaghy Parish.

He died in October 2010, a month after his 90th birthday and is survived by his wife Florence and daughter Heather who attended the dedication service, along with clergy and friends from as far afield as Cavan, Carlow and London.

Mrs Barr was organist and choir mistress for many years at Derriaghy in addition to her many duties as a rector’s wife, and it was most fitting that choir members Trudy Hull and Ashley Beattie made presentations to her and her daughter Heather, on behalf of the parishioners.

Marilyn Kennedy, People’s Churchwarden of St Andrew’s, made a presentation to Canon Stacey.