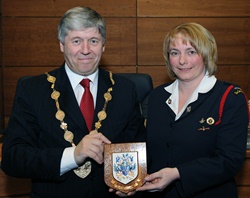 The Mayor of Lisburn, Councillor Brian Heading, hosted a reception for leaders of St Paul’s Girls’ Brigade in the Mayor’s Parlour, Lagan Valley Island, Lisburn, on Monday April 30 to mark the 50th anniversary of the formation of the Company.

Following refreshments, chat and a tour of the Council Chamber, the Mayor congratulated the captain, past captains and leaders for 50 years of faithful Girls’ Brigade work and witness at St Paul’s.

St Paul’s Girls’ Brigade Company was formed by the Rev Ken Cochrane who in May 1962 became curate in charge of the new district of St Paul’s, a daughter church of Christ Church, Lisburn.

The first meeting took place in the curatage which was then located in Belvoir Crescent and the first meeting for girls was held in September 1962 with 62 eager girls in attendance.

The company continued to grow, its peak coinciding with the opening of the church hall in 1974 when 245 girls were enrolled. Now known as 160th NI St Paul’s Parish, Lisburn, over 170 members are affiliated thanks to the hard work and commitment of a team of leaders, past and present, who have always endeavoured to lead young girls to ‘Seek, Serve and Follow Christ’.