Menu
Home > News > SPAR and VIVO ‘milking it’ for Tearfund

SPAR and VIVO ‘milking it’ for Tearfund 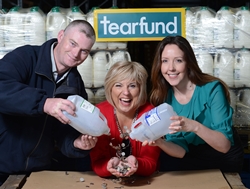 SPAR and VIVO, are encouraging shoppers to ‘milk it’ this summer – 5p from every purchase of two–litre VIVO and SPAR semi–skimmed and full fat milk will be given to support Tearfund partners around the world.

It is hoped the special milk promotion which runs until September, will raise £150,000 for Tearfund. This could be used to empower communities and help as many as 50,000 people work their way out of poverty.

“By selling three million two–litre packs of milk, the SPAR and VIVO stores hope to support thousands of families in some of the world’s poorest countries’ said Neal Kelly, Fresh Foods Director at Henderson Group.

“It’s just a little of the cost of milk here, but the benefits will be hugely significant in changing lives through Tearfund’s self–help initiatives.”

“As you enjoy your glass of milk today, not only will you be making a healthy choice, but you will be helping this promotion release many thousands from poverty for the long term.”