Also commissioned at the service were the Rev Elizabeth Hanna, rector of St Nicholas, Belfast, to serve as Diocesan Faith and Policy Unit Coordinator and Alison Skillen as South Belfast Area Chair.

MU office–bearers and members from across the diocese were present in the cathedral, as was the newly–commissioned MU All Ireland President, Phyllis Grothier.

The new Diocesan President, who is a parishioner at Whitehead, said that although she had assumed a ‘daunting responsibility’ she was looking forward to the challenge ahead. 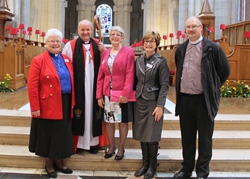