Elizabeth honoured for 50 years on Select Vestry at Magheragall 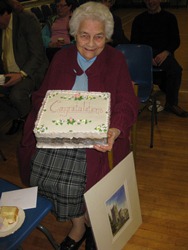 Congratulations to Elizabeth Hill MBE who, a week short of her 90th birthday, completed 50 years’ service on the Select Vestry of Magheragall Parish Church.

A lifelong parishioner of Magheragall, Elizabeth was born on St George’s Day 1923 and was baptised in the parish church on May 27 1923.

The Rector, Select Vestry, and parishioners of Magheragall celebrated this significant milestone and Elizabeth’s pending birthday at the Annual General Vestry when the Rector, the Rev Nicholas Dark, presented her with a cake and a limited edition print of the parish church.

In 2008, Elizabeth’s was awarded an MBE for voluntary services to the community. Elizabeth said that as a teenager she gave her heart to the Lord.

“God has blessed me with many blessings during my lifetime. I commenced my church work well over 70 years ago, that was helping with the tea at the Rev AV McCallin’s Institution as Rector of Magheragall in 1941. I became a Sunday School Teacher and am happy to say that some of my Sunday School children still attend Magheragall Church every Sunday,” she said.

At this year’s General Vestry, Elizabeth was nominated and elected to serve a 51st year on the Select Vestry. The Rector thanked Elizabeth for her dedicated service to the Parish, her willingness to continue to serve the people of the Parish and expressed his appreciation that the Vestry would have the benefit of her wisdom and insight for a 51st year.