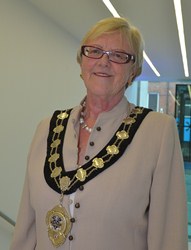 Photos courtesy of the Ballymena Guardian

A Broughshane parishioner made history this week when she was elected as the first ever Lady Mayor of Ballymena.

DUP Councillor Audrey Wales MBE, who joined Ballymena Council two years ago, will be Mayor as the council prepares to amalgamate with Carrickfergus and Larne.

Audrey and her husband Chris have been parishioners of St Patrick’s, Broughshane, for the past 10 years. Audrey is a member of MU. They are regular attenders at St Patrick’s, and are well known because of their work in the community. Audrey was awarded the MBE for services to the community a couple of years ago.

A prominent businesswoman, she is a former President of the National Federation of Newsagents and a past President of the local Chamber of Commerce and Industry. She has also served as chair of the Police and Community Safety Partnership and was also instrumental in helping to set up the Pennybridge Business watch scheme.

Audrey spoke of her pride at becoming Mayor and said she would endeavour to carry out the duties of first citizen to the best of her ability in the interests of everyone in Ballymena. 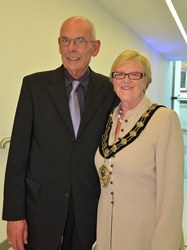