Institution of rector of St Peter and St James 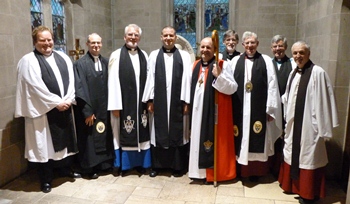 The Rev Brian Lacey was instituted as rector of the United Parish of St Peter and St James, Belfast, at a service in St Peter’s on Monday June 17.

Brian, who was previously Curate Assistant of the Parish of Ballymena and Ballyclug, hails from Dundonald and later lived in Ballymena. In 1997 he went to Queen’s University, Belfast, to study Archaeology and during this time he felt God calling him towards Ordained Ministry.

Brian attended the Church of the Resurrection at Queen’s and later joined the congregation at St Thomas’s on the Lisburn Road, where he served for two years as People’s Church Warden.

He worked in a number of jobs, and was Sexton in St Anne’s Cathedral before training for Ordination at the Theological College in Dublin. During that time he served as Student Reader in St Thomas’s, as well as in placement parishes with varying styles of worship: Ballymacarett in East Belfast, the Student Chaplaincy at Queen’s, the grouped parishes of Finaghy and Upper Malone, and the Independent Evangelical Church in Gran Canaria.

In 2010 he was ordained as Curate Assistant in the Parish of Kilconriola (Ballymena) and Ballyclug.

The Service of Institution drew a large crowd, and Brian was instituted as incumbent of St Peter and St James by the Rt Rev Alan Abernethy, Bishop of Connor. Preacher at the service was the Rev Canon Walter Lewis, former rector of St Thomas, Belfast.