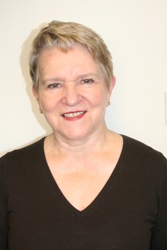 Congratulations to St Anne’s Cathedral parishioner Mrs Desney Cromey who was awarded an MBE in the Queen’s Birthday Honours List.

Desney received the award for ‘services to bereaved children in Northern Ireland.’

She is a co–founder of Treetops Child Bereavement Group and the NI Child Bereavement Network. In 2010 Desney retired after 22 years working with the Pastoral Support for Clergy group and Continuing Education in Ministry team in Connor Diocese.

She was a familiar figure at the annual Connor CEM retreats, and in 2009 was part of a team led by the Bishop of Connor, the Rt Rev Alan Abernethy, which attended a clergy conference in the Kenyan Diocese of Kajiado.

Desney is also a founder member of the Corrymeela Community

Crosslinks mission partner Karen Salmon was also awarded the MBE for ‘services to improving health and lives in Ethiopia.’

Karen, who’s sending parish is Knocknagoney in the Diocese of Down, has worked with Ctrosslinks in Ethiopia since 1993.