Menu
Home > News > Ordinand two thirds of the way through his 52 marathons!

Ordinand two thirds of the way through his 52 marathons! 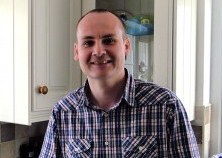 A Church of Ireland ordinand who set himself the unimaginable task of running 52 marathons this summer is two thirds of the way through his run!

Alistair Donaldson from Crossmaglen, South Armagh, is covering an average of 26 miles a day, six days a week for eight and a half weeks.

When he finishes, he will have lapped the island of Ireland, a total distance of 1,298 miles, spreading God’s Word with every mile.

Speaking as he approached Co Mayo last weekend, Alistair said: “God has really blessed all of us throughout. Hopefully, through speaking to the people he has led us to, many hearts have been changed also for the Gospel.”

Alistair is being supported by other runners along the route, but health permitting is endeavouring to go the entire distance himself.

Alistair’s Run4Christ website (http://www.run4christ.org/) states that the run is ‘an initiative seeking to expose many people on the island of Ireland to the amazing Good News of Jesus Christ; His death, resurrection and ascension; and what it means for their own lives.’

Alistair, who has just finished his first year at the Theological Institute, came up with the idea of running round Ireland to spread the Gospel three years ago. He described himself as ‘an enthusiastic and hopeful if somewhat ordinary runner.’ Before this summer he had taken part in five marathons

International Mission Agency Crosslinks is partnering Alistair in his endeavor.

He will reach Connor Diocese on Friday August 19 arriving into Coleraine from Londonderry. The following day he will run to Ballycastle, then after a break on Sunday will continue running via Carnlough, Ballymena, Carrickfergus and Belfast, where he arrives on Thursday August 22.

Alistair will be accompanied daily by a van, equipped with a bath for essential ice baths, and a team of physios will ensure he gets all the physical support and intervention he requires.

If any parish in the towns Alistair is visiting can help with accommodation, or would like him to preach or speak at an event, please get in touch via the Run4Christ website.