Presentation to Canon Irwin as he marks 25 years at Ballymacash 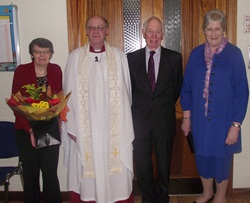 Canon George Irwin will shortly celebrate the 25th anniversary of his appointment as rector of St Mark’s Church, Parish of Ballymacash, in succession to Canon TWW Jones.

Having previously been rector of Movilla Parish in Newtownards and having served as a curate In both St Paul’s and Seagoe Parishes, Canon Irwin came to Ballymacash on December 2 1988.

Since then he has seen many changes, not least in the fabric of the church which has just completed a major refurbishment of both the church and parish halls.

Two of the original parochial nominators, Mrs Kaye Somerville and Mr Hilary Morrison, paid tribute to Canon Irwin on his service to parishioners over the years and in particular to his pastoral care which has been of the highest order and on Sunday November 24 a presentation was made to Canon Irwin and his wife Deirdre.