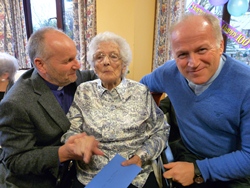 Congratulations to Mrs Ruby McMichael, a parishioner of St Brigid’s, Mallusk, who celebrated her 100th birthday on December 3.

Ruby, who now lives in Jordanstown Care Home, was joined by her children, grandchildren, great grandchildren, relatives and friends for a birthday part in the home. Among the guests was Ruby’s rector, the Rev Bill Boyce, and the Bishop of Connor, the Rt Rev Alan Abernethy.

Ruby was born on December 3 1913 in Loughmacrory in the parish of Termonmagurk, Carrickmore, Co Tyrone. 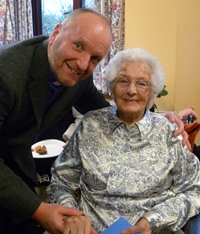 On leaving primary school she entered household service at the house of the local estate owner. Later on she trained as a nurse at the Tyrone and Fermanagh mental hospital in Omagh where she met and married her husband James in 1936.

In the early seventies Ruby and Jim left Omagh as their children had moved away, and settled in Carnmoney. They became members of St Brigids during the ministry of the Rev Jim Martin, and were fully involved in the life of the parish, taking great comfort from the friendship they received from all parishioners.

Jim sadly passed away in 2001 after a short illness but Ruby continued to attend Church services until early in 2011 when she moved into a nursing home.

Our pictures show Ruby enjoying her 100th birthday party with Bill and the Bishop!