The church was planted in December 1992 by St Nicholas, Carrickfergus, and since then the congregation of 20 people has grown to over 200 who regularly attend on a Sunday morning. 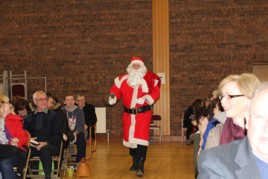 Santa also paid a visit to the 21st Birthday celebrations to receive rather than present gifts. The gifts were brought in by boys and girls and Santa will deliver these to the Board of Social Responsibility where they will be distributed to other children across Northern Ireland.

Our group photo is of the families who were sent by St Nicholas’ in December 1992 to plant Holy Trinity.