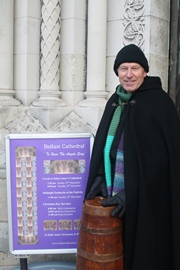 The Dean of Belfast begins his third Black Santa Christmas sitout for charity at St Anne’s Cathedral on Monday December 16.

In the days leading up to Christmas Eve, the Very Rev John Mann will be joined on the cathedral steps by cathedral clergy, the Bishops of Connor and Down and Dromore, and members of the Cathedral Chapter.

As usual, most of the money collected will be distributed to local charities, with a portion going towards overseas work. This year there will be a separate collection to be donated to the Philippines Appeal.

Dean Mann said: “As we begin the Black Santa sitout again this year we are very conscious of needing to support local charities as we always do, but we are also very aware of the situation in the Philippines and elsewhere in the world.

“Money donated during the Christmas sitout will be divided in the way it usually is, with most going to small local charities and some going towards overseas development, but we will keep a separate collection for anyone who wishes to give specifically to the Philippines Appeal.” 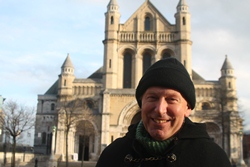 This will be the 37th Black Santa sitout, a tradition started in 1976 by Dean Sammy Crooks who, concerned at the emphasis being placed on necessary and costly building programmes at the cathedral, decided to stand on Donegall Street in front of the cathedral and beg for the poor and charitable causes.

The sitout takes place from 9am–5.30pm every day from December 16 until Christmas Eve with the exception of Sunday December 22.

Reflecting on his annual challenge, Dean Mann said: “I have not risked checking the weather forecast, I just hope it doesn’t rain. But whatever the weather, I look forward to meeting lots of people on the steps of the cathedral in the coming days.”

The Belfast Telegraph will be running its annual Black Santa Diary during the sitout, so readers can keep up with the day to day happenings on the steps of the cathedral.