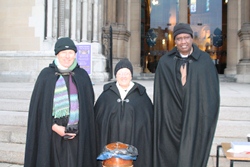 The Dean of Belfast, the Very Rev John Mann, said the 2013 Black Santa Appeal had met with ‘a wonderful response.’

Dean Mann said the annual collection, taken during the sitout on the steps of St Anne’s Cathedral which this year ran from December 16 until Christmas Eve, should not be far short of £200,000 when all funds are counted.

This year, in response to the devastation cause by Typhoon Haiyan, a separate collection was taken during the sitout for the people of the Philippines.

The figures show that to date the appeal has: