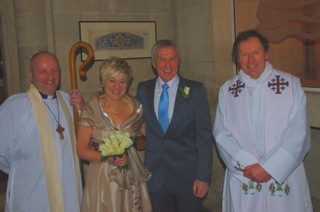 Dean’s Vicar at Belfast Cathedral, the Rev Canon Denise Acheson, became the first serving member of Belfast Cathedral clergy to be married in St Anne’s when she exchanged vows with Mr Terry Bickerstaff.

The couple were wed by the Dean of Belfast, the Very Rev John Mann, on Saturday January 18 in the Cathedral’s Chapel of Unity. The Bishop of Connor, the Rt Rev Alan Abernethy, gave an address during the service.

Denise’s husband William died in 1994. She has three children and five grandchildren. Terry, who is also widowed, has a son and one grandchild.

A former lab technician at Collegiate Grammar School in Enniskillen, Manchester–born Denise was ordained in June 2005 and was curate assistant at the Parish of Ballyholme, Bangor, before being appointed rector of St Colman’s, Dunmurry.

She has been Dean’s Vicar at St Anne’s Cathedral since last September and has particular responsibility for all aspects of the liturgical life of the Cathedral including baptisms, weddings and the organisation of special services. She is also Canon Treasurer at the Cathedral.

Congratulations are extended to Denise and Terry, who are visiting family in England before honeymooning on a cruise ship in the Caribbean.