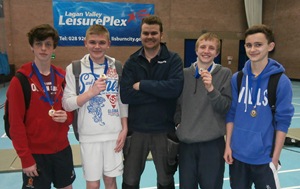 Magheragall and Ballinderry Companies had a successful night at the Church Lads’ and Church Girls’ Brigade indoor hockey competition.

This was held at the Lisburn Leisureplex, and there was a better entry than in previous years with nearly 30 teams taking part across the various age groups.

In Group A, for children up to and including Primary Six, it was St Saviour’s, Dobbin, that led the way, taking home gold medals in both lads’ and girls’ competitions.

The girls from Seagoe Parish also won gold in two age groups, in Group B (13 and under) and Group C (16 and under). The Magheragall and Ballinderry Companies were the other group winners on the night, winning the lads’ Groups B and C respectively.

The Brigade’s next competition is its 5–a–side football championship to be held at the Laurelhill Sports Arena in Lisburn on Saturday March 22 from 7pm.