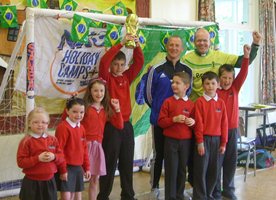 Children at Cairncastle Primary School went football crazy in a special World Cup assembly last week which featured a real–life penalty competition and a presentation of the famous golden trophy.

Visiting speaker the Rev Roger Thompson, rector of St Patrick’s with All Saints’, invited IFA Grassroots Development Officer Wes Gregg along to help, and together they demonstrated their heading skills before leading the children in some warm–up exercises and songs.

Seven children were then chosen to take part in the penalty shoot–out and award ceremony.

Roger talked about Brazilian football star Kaka who was part of the 2010 World Cup squad, and won 2007 FIFA international player of the year. For him the glory of scoring a goal was always turned to a prayer of thanks with his trademark celebration pointing to heaven. This was in recognition of the miraculous healing he experienced aged 18 when he broke his neck in a swimming accident.