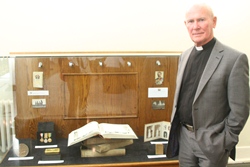 The Rev Campbell Dixon, St Anne’s, with the memorial books on loan to the exhibition.

A number of St Anne’s Cathedral’s memorial books containing the names of those known to have died in WW1 are now on show in Belfast City Hall.

The ‘Lest We Forget’ exhibition by Visual Artist Lise McGreevy brings together a unique collection of WW1 art and artefacts in one location.

They include artefacts from the Royal Ulster Rifles’ and Somme Museums. Lise said: “It is brilliant to know that the three great historical institutes will bring items from their iconic WW1 archives together in one venue for the first time ever. These precious items will be an excellent contextualisation for this poignant event, which depicts and commemorates all those who played such a vital role and especially those who gave the ultimate sacrifice.” 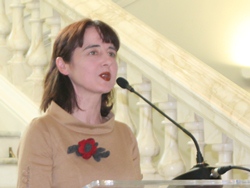 Visual Artist Lise McGreevy welcomes guests to the launch of her ‘Lest we Forget’ exhibition.

The exhibition gives an insight into the human story behind WW1 for the local men and women who served in many different ways. Related story.

After the exhibition, Lise plans to research and photograph Memorial Records 1914-18 which give many details of all those from Northern Ireland and Ireland who died during WW1.

“St Anne’s Cathedral has given me unlimited access to all eight of these historic ledgers which they have kept safe in their vaults for decades, a truly amazing experience for any photographer,” Lise said. “

The exhibition was launched at City Hall on Tuesday April 21 and the evening included the re-enactment of a scene from Belfast Playwright and Senior Lecturer at Queen’s, Brenda Winter Palmer’s WW1 Drama, Medal in the Drawer. 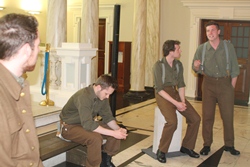 St George’s chorister Matt Jeffrey, seated, in character as actors played a scene from ‘Medal in the Drawer’ at the launch of Lise McGreevy’s exhibition.

The actors are all drama students at Queen’s, and one of them, Matt Jeffrey, is a member of the choir of St George’s Parish Church, Belfast. He opened the scene from the play with a sombre, and quite lovely, ballad.

Adding further poignancy to the launch was a recital of poetry and music by cadets from the Reserve Forces and Cadets Association for Northern Ireland, including The Last Post played by a Cadet on a bugle, and ‘Flowers o’ the Forest (Piper’s Lament) on the bagpipes.

The Rev Campbell Dixon, who attended the launch on behalf of St Anne’s Cathedral, praised Lisa for the quality of the exhibition and her commitment to bringing it all together, and led a prayer in remembrance of those who died in World War One.

Four of the eight Memorial Books from St Anne’s remain on display in the East Wing Gallery of Belfast City Hall, and the exhibition is open daily until Thursday April 30. Admission is free.