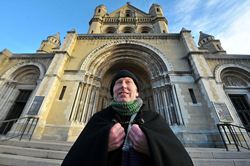 The Black Santa Sitout for charities take place on the steps of St Anne’s in the days before Christmas. The current Black Santa is Dean John Mann.

Charity and community groups are advised that applications are now being taken for grants from the 2015 Black Santa Sitout.

Every year since 1976, the Dean of Belfast and members of the Cathedral Chapter have stood on the steps of St Anne’s Cathedral in the days before Christmas collecting donations for charitable causes.

Last year’s Sitout raised almost £200,000 for charities, and this was distributed to more than 200 charities and community organisations at the annual Good Samaritans’ Service in St Anne’s in February.

Application forms for a grant from the 2015 Sitout are available from St Anne’s Cathedral, or a form can be downloaded here.

Late applications WILL NOT BE PROCESSED.