A Holy Land pilgrimage – ‘one journey no one should miss’ 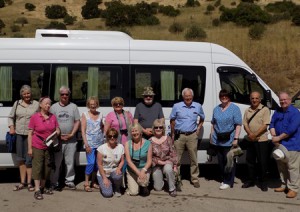 Pilgrimage Group 2015. The pilgrims came from all over Ireland and represented a range of denominations adding an ecumenical flavour to the group. The Rev Amanda Adams is standing, third from the right.

A number of parishioners from Connor Diocese were part of a pilgrimage to the Holy Land last May led by Canon David Humphries assisted by the Rev Amanda Adams, rector of Ballyrashane and Killdollagh Parish.

Amanda and David are leading another pilgrimage in May 2016, and some places are still available. In the following article, Amanda reflects on this year’s very successful pilgrimage. Details about booking the May 2016 pilgrimage can be found at the bottom of the article, or download an information flyer here..

Information meetings will be held on Saturday September 26 at St Molua’s Stormont at 2pm and Tuesday September 29 at Ballyrashane Glebe Hall at 8pm.

Reconnecting with our roots is often viewed as a useful exercise in many walks of life.  The group of pilgrims who set out for the Holy Land on May 26 2015 certainly found this to be true but without exception they each declared that they discovered so much more both about the land of our Lord Jesus Christ and about their own faith and relationship with him.

“I had great expectations of my pilgrimage to the Holy Land,” said Mrs Anna Blair of Kildollagh Parish, “but I found that the reality was even better.” 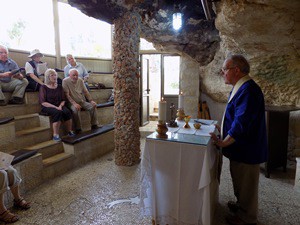 Celebrating in unity – Holy Communion in the Shepherd’s caves, Bethlehem.

She was not alone in feeling the Holy Land’s deep spiritual pull.  Mrs Gladys Henry a member of 2nd Dunboe Presbyterian Church, said: “Those 11 days are a time I will cherish as long as I live and will make the Bible even more alive for me especially after experiencing the deep peace of the wilderness and Sea of Galilee.”

Under the expert leadership of Canon David Humphries assisted by the Rev Amanda Adams the pilgrims were given a chance to get to know each other before heading off to the Holy Land.  This meant that the holy sites were visited in the company of people who quickly became friends, looked out for each other and were able to enhance their own experiences by sharing in the experiences of others.  Pilgrims are not tourists.  Tourists visit or touch a place and then move on.  Pilgrims allow themselves to be touched by the place and find that it moves with them because it has become part of them.

The joy of a pilgrimage is that it is not just about places – it is very much about people.  The group prayed for the sick at home beside the pool of Bethesda where Jesus healed the paralysed man and in the calm of that place amidst the bustling city of Jerusalem, they named before God those whom they carried there in their hearts.

The pilgrims also had an opportunity to meet some of the orphan boys given a home at the Jeel Al Amal school in Bethany.  This facility was founded by a Christian Palestinian woman and is supported by the pilgrimage company.  So not only did the pilgrims reflect on Christ’s compassion, they participated in his continued outreach to the marginalised.

The various members of the group were often surprised about how the places they visited affected them.  Mr Sam Knox of Dunluce Parish echoed the feelings of all when he commented how the ancient hilltop village of Safed had captivated him so that he could have stayed so much longer. There were so many places that the pilgrims journeyed to which had this affect, places where the Old and New Testament touch the present so powerfully that time seems irrelevant

Of course there were also opportunities to float in the Dead Sea, take a cable car to Herod’s majestic fortress-palace at Masada, enjoy the life and colour of Jerusalem as well as its sacred treasures, ride on a camel, shop in a souk, sail on the Sea of Galilee and watch the sunset over the beautiful Golan Heights.

If you would like to go on a pilgrimage to the Holy Land, David and Amanda will be leading another group in May 2016 and have some places still available. Further information can be obtained from Canon Humphries at the address below. If you have never been on pilgrimage –go and if you have been in the past – go again – because this is one journey that no one should miss.