Young people reflect on their night sleeping on the street 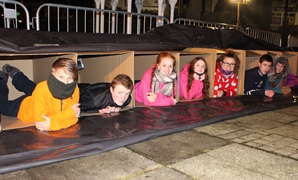 Young people from Lambeg Parish settle down for the night during the Abaana Challenge 48 Sleepout.

Spending a night sleeping on the streets in a cardboard box in the middle of winter is a daunting challenge, but it is one of group of young people from Lambeg Parish decided to undertake.

Youth leader Aimee Gibson and a group of six young people from Lambeg took part in the Challenge 48 Sleepout with Abaana – a Bangor-based charity which has been supporting street children in Uganda since 1998.

The challenge aimed to give them an idea of what life is like for those living on the streets in Uganda and to raise money and awareness of the charity and its work.

The sleepout took place in Bangor in December. The only money the young people had were some 20p pieces for the public toilets and so they were reliant on the generosity of passers-by giving them food and hot drinks.

Aimee recalled: “Around 2am everyone started to filter off into their boxes – they weren’t the most comfortable but it was better than being outside. 5am came and so did the rain, it got so heavy that the boxes started to give way to the weight of the rain.”

Everyone was up by around 8am and the fire pit was very quickly re-lit and local business provided gazebos for shelter, tea and coffee and bacon butties.

Before leaving for home, the young people from Lambeg took part in a street collection.

Funds raised through Challenge 48 go towards Abaana’s education and water projects and its work with Street Children in Uganda. This will include seeking to rescue a further six children during 2016 who are currently living rough on the streets.