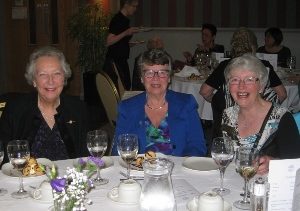 Mrs Roberta McKelvey has been jointly awarded the Community and Voluntary Award by the Northern Ireland Women’s Forum, having been nominated by Connor Diocese Mothers’ Union.

Roberta held many posts within Mothers’ Union and was a Trustee for World Wide Mothers Union for 12 years, six as a representative of members in Anglican Provinces around the World. 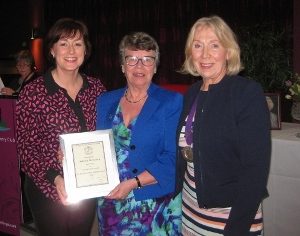 Donna Traynor of the BBC presents the Community and Voluntary Award to Connor MU nominee Roberta Mckelvey. Also in the picture is Pat Irvine, Chairman of Women’s Forum.

She assisted with the introduction of the Literacy and Development Programme in the Sudan and was a founder member of the Central Belfast Child Contact Centre.

The Award was one of a number presented at the Women’s Forum Friendship Lunch held on April 10 in Newforge Country Club.

Iris Colvin, a former Chair (1988-1991) and Honorary Life Member of Women’s Forum Northern Ireland, was a much loved, highly respected and matriarchal figure in business, professional and women’s organisations and the voluntary sector in Northern Ireland. 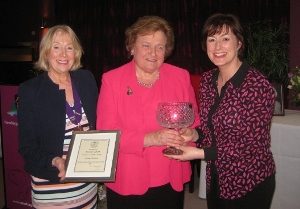 Marion said she was honoured to receive the award, especially as she had known the late Iris Colvin for many years, having met her at a Flower Festival in St Anne’s.

Marion was nominated by the President of Queen’s Women’s Graduates.

“It was a real honour,” said Marion. “They read a lovely acclamation although I was too dazed to take it all in, but I said a few words about my contact with Iris. I was really overwhelmed.”

You can learn more about Marion’s work offering psychosocial support to individuals and communities in the aftermath of traumatic incidents worldwide here.

The awards were presented to the winners by Donna Traynor of the BBC.