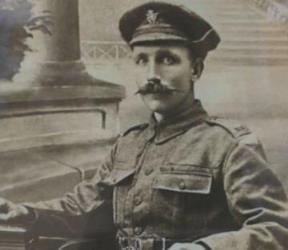 The courage of Robert Quigg VC at the Battle of the Somme will be recalled in Billy Parish Church on September 10 and 11 as the parish takes part in European Heritage Open Days.

Rifleman Robert Quigg, a lifelong member of Billy Parish, received the Victoria Cross, the highest military honour awarded for valour in the British Commonwealth, for his actions at the Somme.

In June this year, Her Majesty the Queen visited Bushmills to unveil a statue of Robert Quigg, which was dedicated by the rector of Billy and Derrykeighan, the Rev John Anderson. Full story.

Over the two European Heritage Open Days, when around 300 historical properties open to the public for free across Northern Ireland, Billy will be hosting a WWI Display celebrating the heroism of Robert Quigg.

The church will be open from 11am-5pm on both Saturday and Sunday, and there will be special commemorative services on Sunday at 10.30am and 6pm.

Refreshments will be available in the church hall, admission is free, and everyone is welcome.