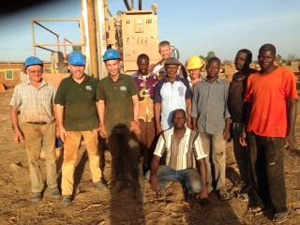 Keith, Denis and Tim, to the left of the photo, with the well drilling team in Burkino Faso.

Three Lisburn Cathedral parishioners returned from Burkino Faso at the weekend after spending three weeks with a Friends in Action drilling team.

Denis Fullerton, Keith Forsythe and Tim Flanagan had flown to the north African country to join a team led by Mark Collier and Tim Wilson.

During their trip, Denis, Tim and Keith kept Cathedral parishioners and friends updated on their work via the Lisburn Cathedral Facebook page.

Their first drilling site was in the Koudougou area, a three hour drive from Mark’s home in Ouagadougou where they had been welcomed with Sunday lunch.

“We found ourselves five miles off the main road, in a village, in the depths of the north African bush. Pastor Isaac, his wife and family live right beside the little church with a congregation of 250 in an area with many believers. 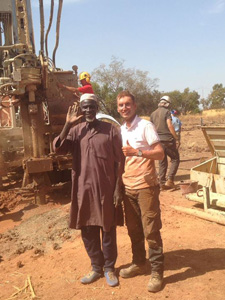 Tim Flanagan with a local man at one of the drilling sites in Burkino Faso.

“They gave us a heartfelt welcome and led us in a prayer of thanksgiving for the return of the drillers to finish off the well almost completed by the previous team of volunteers from our neighbours in Legacurry Presbyterian church.”

The team quickly started drilling hoping a well would be established with a good flow of water within two days.

Things did not go quite to plan, but the ultimately the new well in the village, Tiekuy, was a great success, as the men recounted in their update on November 30.

“Today was a huge success. We had to change drilling location in Tiekuy due to a muddy hole. At the second location in the village we were making good progress when a hammer fell down the well, rendering it unusable.

“After speaking with the church pastor, whose congregation met to pray, we filled in the hole and started again five yards away – this time producing a 800 gallons per hour well at a depth of 165ft. Everyone in village (and on the team) was delighted.” 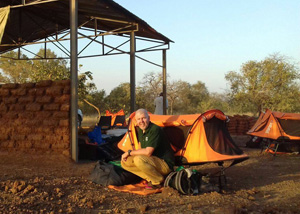 Keith gets out of bed (his tent) to begin another day’s work in the African sunshine.

The men were presented with a goat for their efforts. “Pray that the well would continue to develop connections for the local church with their neighbours,” they posted.

The team drilled two wells in Tiekuy (pronounced Cheque-wee) before moving to Bombella to begin a third well in a particularly muddy area.  On the Saturday they went back to Ouagadougou for a break and church on Sunday, before returning to Bombella.

By the Tuesday evening, December 6, things were once again not going to plan.

“We are still in Bombella trying to get a well. We had hoped to finish it on Monday. – We are now on our seventh drilling attempt in this village, mud everywhere! Drill head got stuck in the hole earlier but we are determined to get the people water. Please pray for success.

“Mark was ill, vomiting on Monday night, but thankfully appears to be on the mend – but pray that it’s not Dengue as there has been an outbreak in Burkina recently.”

By the Thursday the team’s third well was finished, after what they described as ‘a difficult number days.’ They also reported that Mark was much better, and while everyone was exhausted, they were in good health.

The team started work in a new village on the Friday morning after spending a week in Bombella.

“We praise God we were able to find a really great supply of water by 01:30 this morning (Sat) Finished it off this morning

“That’s four wells from five holes including the one finished off for the Legacurry team.”

The team travelled back to Ouagadougou on Saturday afternoon with just time for a shower and something to eat before flying back to Northern Ireland that night.

“All very tired and excited with the opportunity to see God at work out here.”