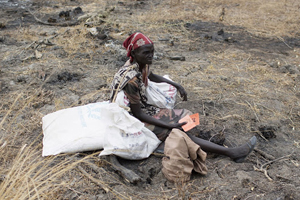 Christian Aid says 100,000 people are at risk of starvation, and a further one million are classified as on the brink of famine in South Sudan.

The Dean of Belfast released £7,000 from Black Santa funds to Christian Aid in an immediate response to reports that South Sudan is in the grip of famine

The charity says that 100,000 people are at risk of starvation, and a further one million are classified as on the brink of famine. Almost five million people are in urgent need of food.

The people in this relatively new country have already experienced three years of conflict, and are at breaking point with harvests being disrupted, increasing food and fuel prices, and the collapse of the economy – they are struggling to feed their families and have been surviving on wild foods and drinking unsafe water.

The Dean, the Very Rev John Mann, said the donation was being given ‘conscious of the humanitarian catastrophe that has been unfolding for some months across the whole region, but specifically in South Sudan with which the local dioceses have a special affiliation.’

The money comes from funds raised by the annual Black Santa Sit-out on the steps of St Anne’s Cathedral.

Dean Mann said: “With a feeling of near helplessness in the face of huge need we make this modest grant to Christian Aid, whose partners will ensure that it is used to relieve suffering in one of the most desperate situations in the world today.”

Rosie Crowther, Christian Aid’s South Sudan Country Manager said: “I have witnessed first-hand the incredible resilience of South Sudanese people in the face of many crises. However, many people have now exhausted their coping mechanisms, and tens of thousands could die of starvation, millions do not know where their next meal is coming from.

“Tragically, this crisis was utterly preventable… The situation will continue to deteriorate rapidly if we don’t act now.”